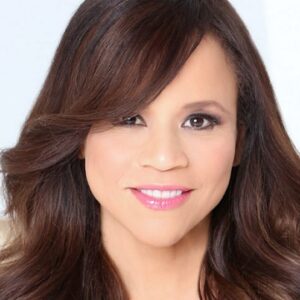 Popular American actress Rosie Perez also works as a show host, writer, dancer, choreographer, and social activist. She had experienced some of the hardest times of her life as a foster child and ward of the State. She hardly ever received affection from either of her parents because she was the offspring of an extramarital affair. She got lucky when director-producer Spike Lee approached her for a role at a farewell party. She gained recognition for her debut performance in the film “Do the Right Thing,” and went on to star in several other successful movies, including “White Men Can’t Jump” and “Fearless.” She rose to fame as a choreographer for the television program “In Living Color,” for which she received three “Emmy” nominations. She rose to fame on Broadway after playing Googie Gomez in “The Ritz.” She was hired in 2015 to serve as the regular host of the popular discussion show “The View.” Her more recent roles include those in the movies “The Take” and “Pineapple Express.”

Rosa Maria Perez, a New Yorker, was born on September 6, 1964, in Brooklyn. Her mother, Lydia, was a singer, and her father, Ismael Serrano, was a merchant marine from Puerto Rico.

Her parents were not wed, and she was the result of an extramarital relationship. She was born at Brooklyn’s “Greenpoint Hospital” by her mother. Up until the age of three, when her mother placed her in foster care, she was looked after by a maternal aunt.

Despite frequently traveling to Perez to care for her, her mother’s illness prevented her from filling the vacuum in her life. 10 of Perez’s half-siblings come from her mother. Years later, her mother passed away from AIDS-related complications.

She had foster parents before being given to nuns, who raised her with a strict Catholic upbringing but who also suffered at the hands of a few nasty nuns.

She suffered from a speech handicap as a result of the early traumatic experiences of her life, which included abuse and abandonment. This added to her already difficult circumstances.

She ultimately found comfort in the love and adoration of her paternal aunt, Ana Dominga, after several miserable years, and she started going to “Grover Cleveland High School” at that point.

She went to Los Angeles to study marine biology after graduating from high school. Spike Lee noticed her at a club in her second year of college. Her life was forever changed when Lee offered her a part in a movie.

The public first saw the gifted Perez in the 1989 movie “Do the Right Thing.” The year after her debut, she was cast in a number of projects, including the television movies “Criminal Justice” and “21 Jump Street” and “In Living Color.”

She played Gloria Clemente in the movie “White Men Can’t Jump” and Cyndi in “Untamed Heart” both released in 1992. She was given one of her most notable roles the following year in the film “Fearless.”
She played Mercedes in “Somebody to Love” and Muriel Lang in the Hollywood movie “It Could happen to You.” With her role as Thumbelina in “Happily Ever After: Fairy Tales for Every Child,” she also established a voice acting career.

She appeared as Debbie in the film “A Brother’s Kiss” and in the titular role in “Perdite Durango” in 1997, which was a busy year for her.

She voiced Chel in “The Road to El Dorado” and portrayed Grace Santos in the film “The 24 Hour Woman.” She provided the narration for the scenes in the 2003 film “From the 10th Floor.”
She also made a cameo appearance on the TV show “Frasier.” She played Bertha in the 2004 television film “Lackawant to Blues,” which received favorable reviews.

She played Ruthie in “All the Invisible Children” in 2005. She rose to fame that year for her portrayal of “Click” in the animated children’s educational series “Go, Diego Go!” and maintained her fame through 2008.
She made her television debut in the 2009 season of “Law & Order: Special Victims Unit,” and from 2009 to 2012, she played prominent guest appearances on shows like “The Cleveland Show” and “Nurse Jackie.”

She appeared in two successful movies in 2012; the first was “Small Apartments,” a comedy, where she played Ms. Baker, and the second was “Won’t Back Down,” a drama directed by Daniel Barnz.

She voiced Red in “The Hero of Color City,” played Zowie in “Fugly,” and portrayed herself as “The View” host in “Pitch Perfect 2” in 2014. She was slated to replace Whoopi Goldberg as co-host of the television program “The View,” however she made the decision to depart the program in 2015.

Following her recurring appearance in the 2016 television series “Search Party,” viewers were able to catch her in 2017 as a guest star on the programs “Pure” and “Nightcap.”

The reviews for her performance in the film “Fearless” were excellent. The film was called an “underrated gem” and garnered an 86% rating on “Rotten Tomatoes.” The movie brought in $7,000,000 at the box office.

Perez played the starring role in the 2008 comedy “Pineapple Express,” which garnered positive reviews with a score of 6.3 out of 10 on “Rotten Tomatoes.”

For her work in the movie “Fearless,” she received multiple accolades in the area of “Best Supporting Actress” in 1993. Following the “Chicago Film Critics Association Award” and a few others, she won her first award at the “Boston Society of Film Critics Award.” She was nominated for the same at the Golden Globes and the Oscars as well.

For her role in “Perdita Durango,” she won the “Fanta festival Award for Best Actress” in 1997. For “Lies in Plain Sight,” she won the 2010 Gracie Allen Award for Outstanding Female Lead in a Drama Special.

In 1991, she wed the director Seth Zyi Rosenfeld. After ten years of marriage, the couple filed for divorce in 2001.

She had a neck injury while she was filming “Law & Order: SVU” in 2009. She filed a lawsuit against the show two years later, alleging “manhandling” on the set.

President Obama appointed her to the “Presidential Advisory Council on HIV/AIDS” in 2010. She also chairs the “Urban Arts Partnership” in New York City.

Due to a difficult background, she was given a diagnosis with depression and post-traumatic stress disorder. She lives in Clinton Hill, Brooklyn, and is presently undergoing therapy.

She and artist Eric Haze attended the Floyd Mayweather vs. Saul Alvarez boxing bout together before being married in Las Vegas on September 15, 2013.

American actress, talk show host, and community activist Rosie Perez is worth $12 million. In addition to her work as an actor, Rosie Perez is a skilled choreographer who has worked on music videos and concerts for a variety of artists, including Janet Jackson, Bobby Brown, and LL Cool J. She has also choreographed for the Fly Girls on the popular television show “In Living Color.”