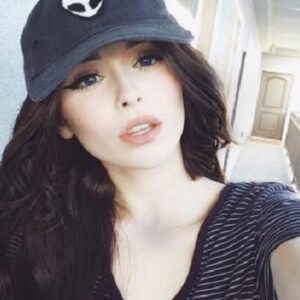 Acacia Brinley is an American pop singer best known as the lead vocalist of the band ‘Watercolor.’ She is also well-known on YouTube, where she has a channel called ‘Acaciacutie,’ where she uploads videos of her daily life. Brinley has had a passion for singing since she was two years old, and her family has always been supportive of her. Aside from singing, the young lady is also a model who has worked for a number of well-known brands. She has also appeared in a number of television shows, films, short films, and reality shows. All of her ventures have helped her gain notoriety and recognition. The American star is now well-known not only on YouTube, but also on other social media sites. Brinley currently has roughly 2.3 million Instagram followers. She also has roughly 745k Twitter followers. Aside from that, she has 1.4 million Facebook likes on her own page.

Acacia Brinley has loved singing since she was a toddler. Both of her parents recognized her talent, and in 2010, they formed the ‘Vocal Variations’ or ‘V2’ performance group for her. Her skill was quickly noticed by the American music industry, and she joined the band ‘Watercolor.’ Brinley was also offered modeling jobs at the same time. She was even signed for a couple of small-screen and big-screen appearances. ‘Untitled Eli Roth CryptTV Snapchat Murder Mystery,’ a short horror film, featured her. The films ‘American Satan’ and ‘Another Day in Paradise,’ as well as the TV series ‘Code: 9’, are among her most well-known works.
Brinley’s YouTube account, ‘Acaciacutie,’ was started on June 1, 2008, when she was just a teenager. ‘CINNAMON CHALLENGE’ was her debut video, and it was followed by ‘I have some strange pals,’ ‘Eating Ice Cream with a Knife and an Asian,’ ‘My efforts at singing,’ ‘This is what I do on a Friday night,’ and a number of others. Her videos are mostly about her life, in which she discusses her experiences, anecdotes, and family life, among other things. Almost every week, the pop singer posts a vlog. Brinley’s talent, charm, and down-to-earth demeanor are just a few of the reasons why she has such a large following on the channel. The American teen’s YouTube channel currently has over 790,000 subscribers. And, of course, she has millions of Instagram and Facebook followers!

Melissa Clark and Richard Clark gave birth to Acacia Brinley on October 22, 1997 in Boston, Massachusetts. Peyton and Keegan are her older brothers, and Maelie is her younger sister (adopted). Cotton and Paradise are Brinley’s two kitties. She is well-known for her kind personality, and she enjoys assisting people with difficulties of self-esteem and self-harm.

Brinley was drawn to singing, acting, and modeling as she grew up, so she tried her hand at everything! When it comes to her love life, the beautiful actress has been in a number of partnerships. Michael Clifford was formerly said to be a close friend of hers. Her next relationship, which began in 2012, was with Sam Pottorff. She dated guitarist Benn Suede after her breakup with Pottorff. In 2015, she split up with him as well and began dating Jairus Kersey. Brinley gave birth to Kersey’s child two years later, a daughter they named Brinley Kersey. Acacia Brinley and her family are currently live in Los Angeles, California.

Acacia is one of the wealthiest pop singers and one of the most popular. Acacia Kersey’s net worth is estimated to be $1.5 million, according to Wikipedia, Forbes, and Business Insider.