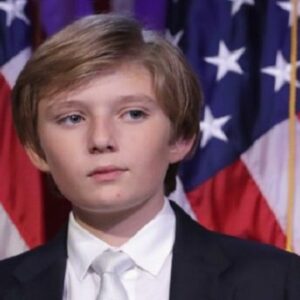 Donald Trump and Melania Trump are the parents of Barron Trump. He has become famous just by having the moniker “Trump” associated with him. He is first lady Melania Trump’s lone child. Despite not being formally engaged on social media, he is incredibly well-liked. Barron has undoubtedly gained the attention of the paparazzi, from being seen playing soccer on the lawns of the White House to being covered by the media for any other activity.

The media has long covered Barron Trump. He was born into one of the richest families in the United States of America and immediately rose to fame. Barron formally assumed the title of “first son of the United States” after President Trump won the 2016 elections. In actuality, he is the first “first son” to live in the White House since JFK Jr. in 1961. In 2016, Barron Trump also became well-known, following in the footsteps of the former “first children of the United States,” Sasha and Malia Obama.

Barron is definitely one of the most popular celebrity kids online right now. Melania Trump, Barron’s mother, refers to him as “little Donald” because of their striking resemblance. He appeared on “The Oprah Winfrey Show” in 2011, which helped him become extremely well-known. In October 2015, he was featured on the cover of “People Magazine.”

Why is Barron Trump so unique?

He is extremely unique because of his remarkable likeness to his father, Donald Trump. At such an early age, he is believed to resemble his father in terms of both appearance and personality.
He is particularly remarkable because he is the only “first son” of the White House in the previous 54 years.
He was raised in the height of luxury, having resided on his own level in the Trump Tower in Manhattan. Barron had an entire floor set aside for him, known as “Barron’s living room.”

Baron Trump was born to Donald Trump and Melania Trump on March 20, 2006, in New York City. Barron is one of the most well-known kids because he is the president of the United States of America’s son.

Prior to moving to the White House, Barron attended privately-funded Columbia Grammar and Preparatory School in New York. Now, however, he attends St. Andrew’s in Potomac, Maryland.

Since his mother is of Slovenian descent, he is bilingual and speaks both English and Slovenian with ease.
He plays soccer and golf well and is an excellent athlete. Barron enjoys playing the drums and is a budding drummer.
Barron Trump, who has a passion for business and a great deal of respect for his father, prefers suits to sweats!
Barron Trump and Donald Trump are similar in a number of ways, including how they mix and mingle.
Donald Trump Jr., Barron Trump’s oldest sibling, is 29 years younger. In this way, he is younger than the kids of Ivanka and Donald Trump Jr.

He uses skincare items from his mother’s line. According to reports, Melania Trump moisturizes him with “Caviar Complex C6,” a moisturizer from her own line.

Donald Trump’s youngest child with Melania is Barron, who is also his only child. At the Episcopal Church of Bethesda-by-the-Sea in Palm Beach, Florida, Barron Trump was baptized in May 2006. In Manhattan, Barron Trump attended Columbia Grammar & Preparatory School. Barron Trump has inherited his family’s $80 million fortune, making up his net worth.