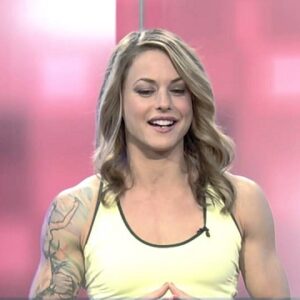 Imagine yourself as this irate young woman, just out of your teens, living life to the fullest while abusing drugs, excessive drinking, and other vices until one fine day mortar stars started to land all around you as you found yourself in the center of an Iraqi war zone. On that day, you must face your fear and tell yourself that the one life you have been given is one that is genuinely worth living. Ladies and gentlemen, that marks the start of Christmas Abbott’s extraordinary second life as a fitness enthusiast, author, and athlete. This 22-year-old woman from Virginia has gone a long way to become an inspiration to many ladies around the world and to inspire fitness zeal among both men and women. There appears to be no stopping Christmas right now, whether it’s writing fitness books or competing as a nationally ranked weightlifter! Her tenacity, patience, and persistence combined with her rebellious nature to accomplish one seemingly impossible task after another. It’s similar to the message she wants to give to all women: that it’s never too late to start caring for your body, and that anything is possible if you really set your mind to it.

Christmas started violating social standards as a teen when she first discovered her rebellious side. She would frequently sneak out of the house and enter parties in search of fun. She would frequently get into trouble for that. Christmas actually went all the way after experiencing a potentially fatal accident at the age of 13 into leading a horrible life of constant drinking, smoking, and even serious drug use.

Christmas wanted to enlist in the Army at the age of 18 but was turned down. He had just completed high school. She later admitted that she was in extremely poor condition and could not run a mile without passing out. When she was 22 years old, she joined the US base in Iraq as a freelance civilian laundry attendant, and her life was permanently altered.

She came to terms with the importance of human life and how she was squandering her own at the army installation. One of her fellow troops introduced her to physical training, and she hasn’t turned back since. She gave up smoking and began a rigorous and disciplined workout regimen.

She learned about the CrossFit program after a fellow soldier showed her a video of tough challenges being taken on by women. Being competitive by nature, Christmas has pulled to it right away. She began to reach each milestone until she annihilated them all in the prestigious CrossFit Challenge.

After serving in Iraq for four years, she returned to the US and established her own CrossFit coaching program in Raleigh. She founded her own gym, CrossFit Evoke, in 2010 and concentrated on creating her own brand. Because of her CrossFit success, she decided to try competitive weightlifting. She quickly achieved national ranking and is now planning to compete at the next Olympics.

As the first female Pit Crew member in the illustrious NASCAR in 2013, she also cleared the path for more lady power. Given that the profession had previously been completely male-dominated and testosterone-ruled, that was a huge accomplishment. Since then, she has persisted in doing what she enjoys most—working out, getting inked, and shattering gender preconceptions.

She has appeared on the front covers of numerous well-known journals, including Sports Illustrated and Harper Collins, where she has flaunted her toned physique and “Badass” demeanor. She published her first book, The Badass Body Diet: The Breakthrough Diet and Workout for a Tight Booty, Sexy Abs, and Lean Legs, in May 2015. It contains all of her advice on how to get in shape and attain that ideal body.

What Is So Special About Christmas Abbott?

Christmas had a shredded body by the time she turned 30 that would put any professional male powerlifter to shame. Her rock-hard six-pack abs, sculpted quads, and biceps are the product of a ton of dedication and a can-do attitude that is undoubtedly uncommon.

One of the many things about her that is incredibly remarkable is her endurance and unwavering focus on her objective. Talking about her past with admirable candor is another great impact point that Christmas supports.

Owning up to one’s troubled history is difficult, especially after achieving the pinnacles of achievement. But Christmas has never tried to hide the fact that she was a disobedient and destructive adolescent. Instead, she has accepted it as an integral part of her identity and used it to inspire others by demonstrating that it is never too late to make positive changes in your life.

Christmas Abbott was born in Lynchburg, Virginia, on December 20, 1981. She currently resides in Raleigh, North Carolina, and operates the Crossfit Invoke gym on her own. Her father, Ed Abbott, who loved to ride motorcycles, gave her the desire for tattoos for Christmas. She acknowledges that it naturally came to her after spending a lot of time with big, inked motorcycle dudes when she was younger.

Barbara, her mother, served in the American Army. Barbara received a breast cancer diagnosis in 2014, and throughout her chemotherapy, she inspired not only her daughters but also other women. Christmas acknowledges that her mother is both her role model and greatest motivation.

When Christmas was 13 years old, she was involved in a terrible vehicle accident in which her sister Kole suffered severe injuries and fell into a coma. Kole eventually made a full recovery, but the tragedy had a lasting effect on Christmas and made her even more defiant.

On October 10, 2015, Christmas proposed to Geoff Kercher, and the two have set a September 3, 2017 wedding date for Raleigh, North Carolina. Prior to 2014, Christmas was in a relationship with and then engaged to photographer Josh Holmes, however, they broke up before their nuptials.

One of the wealthiest and most well-known Instagram stars is Christmas. Christmas Abbott’s net worth is estimated to be $1.5 million based on our research and information from sources like Wikipedia, Forbes, and Business Insider.