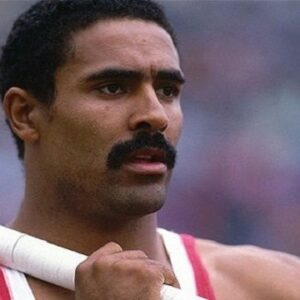 Former English decathlete Daley Thompson is widely regarded as the finest decathlete in history. Thompson, a four-time world record holder, earned two Olympic gold medals, three Commonwealth titles, two European Championship titles, and a world championship gold medal. He is also the only athlete to simultaneously hold the European, Commonwealth, World, and Olympic titles for a single event. He was the unbeaten decathlon champion for nine consecutive years, from 1978 to 1987. You may be astonished to learn that his score of 8847 points at the 1984 Olympics in Los Angeles is a British record to this day. Thompson is one of only two decathletes to have won two Olympic gold medals, together with Bob Mathias. Throughout his illustrious career, his rivalry with Jurgen Hingsen garnered much public attention. The duo consistently surpassed each other’s world records. However, Thompson consistently outperformed Hingsen in big competitions. Thompson’s career was cut short due to a recurring hamstring problem. However, he is still regarded as the finest athlete the nation has ever produced.

Daley Thompson was born in Notting Hill, London on July 30, 1958, to Frank and Lydia Thompson. His father operated a taxi. When Thompson was twelve years old, his father was shot and killed in Streatham.
His early schooling was received at Farney Close Boarding School in Bolney, Sussex. Initially, he intended to pursue a career in football, but he soon shifted to athletics.

At age 14, he was exposed to the Haywards Health Harriers, a local athletics club. Everyone believed that he was born to be an athlete almost quickly after he entered the sports league. In the English Schools Intermediate 200m, he placed fourth.

Following completion of his education, Thompson moved to London. In London, he joined the Newham & Essex Beagles Athletics Club and began sprinting training. Under the supervision of Bob Mortimer, Thompson attempted the decathlon. Later that year, he competed in and won his first decathlon in Cwmbran, Wales. He also won his next tournament.

In 1976, Thompson was named to the British Olympic team for the Montreal Games. He was not even 18 at that point. He concluded the game in the 18th position as the game’s youngest participant. The subsequent year, he won the European Junior Championship and placed seventh in the Long Jump.

Thompson won his first of three Commonwealth titles in 1978. In Prague, he placed second at the European Championship. With each triumph, Thompson’s self-assurance soared.

1980 marks the beginning of Thompson’s illustrious career record. Thompson established the decathlon world record in Gotzis, Austria, during one of the best track and field competitions, with a score of 8648. This was followed by an easy victory at the Moscow Olympics.

Thompson’s form declined in 1981, but he returned to form in May 1982 at the Gotzis, when he established yet another world record with 8730 points. Later that same year, he won his second Commonwealth title in Brisbane. In the same year, he won his first European Championship gold medal in Athens.

Thompson successfully defended his title against Jurgen Hingsen, his biggest opponent and world record holder, at the 1984 Olympics in Los Angeles. Thompson finished the game with 8847 points, a feat that remained until 1992 when Dan O’Brien of the United States exceeded it with 8891 points. This was Thompson’s second decathlon victory at the Olympics. After Bob Mathews, he became the second athlete to win gold twice.

In 1986, Thompson won his third title in the championships by claiming the gold medal in the Commonwealth Games held in Edinburgh. In the same year, he won bronze at the European Championships in Stuttgart for the 4X100m relay.

In 1987, after nine consecutive years as the winner, Thompson experienced his first loss in the decathlon at the World Championship, where he finished eighth. He participated in the 1988 Olympic Games in Seoul and finished in fourth place.

Thompson qualified for the Commonwealth Games team in 1990 but was forced to withdraw due to injury. Due to a recurrent hamstring problem, he was forced to retire from athletics two years later.

After leaving athletics, Thompson returned to his first love, football. He played professionally for Mansfield Town and Stevenage F.C., as well as Non-League for Ilkeston F.C. He also served as a fitness instructor at Wimbledon F.C. and Luton Town F.C. In 1994, Thompson gave racing a go, competing in the the the Ford Credit Fiesta Challenge.

Aside from his athletic career, Thompson was a fitness trainer and motivational speaker. He participated in numerous corporate events. He has appeared in a few television ads. Ocean Software licensed his name for three home computer games: Daley Thompson’s Decathlon, Daley Thompson’s Supertest, and Daley Thompson’s Olympic Challenge.

Thompson served as an ambassador for the 2012 Summer Olympics in London. As an ambassador, he emphasized the positive impact that hosting the Olympics has on education and sports in schools.
Thompson became an entrepreneur in 2015 when he opened his own gym, Daley Fitness. The gym is situated on Upper Richmond Road in London, United Kingdom.

Between 1978 and 1987, he stayed unbeaten in all tournaments. He won gold medals at the 1980 and 1984 Olympic Games and was the first athlete to simultaneously hold the European, World, Commonwealth, and Olympic titles.

Daley Thompson married Trish, with whom he had three children. Later, they separated. He currently resides with his girlfriend Lisa, with whom he shares two children.

The net worth of English decathlete Daley Thompson is $4 million. In July 1958, Daley Thompson was born in Notting Hill, London, United Kingdom. In both 1980 and 1984, he won the decathlon gold medal in the Olympic Games. Thompson broke the decathlon world record four times during his career.