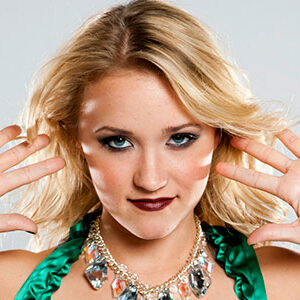 Emily Osment is an actress and singer from the United States who is best known for her part in the Disney television series ‘Hannah Montana.’ She began her career in Hollywood with the film ‘The Secret Life Of Girls,’ after working on a few advertisements. She was in demand for numerous celluloid projects at a young age, just like her brother Haley Joel Osment. Because she appeared in several successful television shows, Emily Osment quickly became a household name. She has been in a number of films and television shows during the course of her career, which has lasted just over a decade. Emily Osment has also created a number of chart-topping singles, demonstrating her abilities as a singer. Emily Osment is unlike many other entertainers in the industry since she is multi-talented. She has volunteered for a number of philanthropic organizations.

Emily Osment was born on 10 March 1992 to Theresa Osment and Michael Eugene Osment in Los Angeles, California. Her father is an actor who has worked in various movies.
She starred in a commercial for the retail behemoth ‘Florists’ Transworld Delivery’, popularly known as ‘FTD’, back in 1998. She was hardly six years old back then. Soon, Emily Osment was seen in various successful commercials.

She made her celluloid debut in 1999 with the film ‘The Secret Life Of Girls’, which also starred notable actors like Linda Hamilton and Eugene Levy. The same year, her second film, ‘Sarah, Plain and Tall: Winter’s End’, also released. The film was distributed by ‘Hallmark Entertainment’ and was telecast on the channel ‘CBS’.
Soon after, she bagged roles in various television productions like ‘Touched By An Angel’, ‘3rd Rock From The Sun’ and the internationally acclaimed comedy ‘Friends’.

The most successful film of Emily Osment was the 2002 spy adventure flick ‘Spy Kids 2: The Island Of Lost Dreams’, which went on to become a blockbuster and made more than $200 Million worldwide.
The very next year, she was seen in the third chapter of the ‘Spy Kids’ franchise, dubbed ‘Spy Kids 3-D: Game Over’, which was a tremendous box office success too. According to sources, the movie went on to earn roughly $198 Million worldwide.

Emily Osment next worked on the 2005 animated feature ’Lilo & Stitch 2: Stitch Has A Glitch’. She dubbed for a minor role in this Walt Disney film.

Emily Osment’s iconic TV series ‘Hannah Montana’ was a major step in her career. She was in a group with Miley Cyrus and her father Billy Ray Cyrus.

She and her ‘Hannah Montana’ co-star Mitchel Musso, an actor and musician, worked on a ‘Disney Mania’ reprise of the ballad ‘If I Didn’t Have You.’ They both appeared in the music video for this upbeat song.
Emily Osment had a successful 2008-09 with the release of ‘Dadnapped’ and ‘Soccermom’. Dadnapped was a Disney Channel original television series, whereas Soccer Mom was an independent film released on DVD.
In 2009, she collaborated with the rock band ‘Eve 6′ on numerous tunes. During this time, she collaborated with Tony Fagenson, Toby Gad, and Max Collins.

Emily Osment’s 2009 single ‘All The Way Up’ went on to become a chartbuster.
Celeste Kendall Parkins was one of the characters in the early 2010 ‘Disney XD’ television series ‘Kick Buttowski: Suburban Daredevil’.

Emily Osment gained fame after releasing ‘Let’s Be Friends’ in June of that year. The song went on to dominate many music charts.

Emily Osment released ‘Fight or Flight’ in late 2010. Wind Up Records, a popular record label, backed it.
In mid-2011, she starred in the TV movie Cyberbully. ABC produced this film about the serious issue of online bullying. Her latest engagement with Disney was the 2012 release of the third installment of the beloved Beverly Hills Chihuahua franchise.

Emily Osment starred in the 2013 American TV series ‘Cleaners’. In the same year, she appeared in an episode of Charlie Sheen’s hit sitcom “Two and a Half Men.”
Her 2013 suspense film ‘A Daughter’s Nightmare’ included an ensemble cast. The movie was televised the next year on Lifetime. She landed the starring role of Gabi in the 2014 ABC Family sitcom ‘Young & Hungry’. The series was well-received, and the fourth season is presently airing.

Emily is best recognized for her part in the Disney television series ‘Hannah Montana’. This event made her very popular and opened doors for her.

For her role in Disney’s television series “Hannah Montana”, she was nominated for approximately seven “Young Artist Awards” between 2000 and 2009.
Emily Osment received Prism and Canadian Screen Awards for her role in Cyberbully.
Her participation in the sitcom Young & Hungry earned her three Teen Choice nominations.
Forbes magazine included her in their list of ‘Hot Kid Stars To Watch’.

Emily Osment has been involved in several projects outside performing. She teamed up with CosmoGIRL! magazine for a good cause. Her clothing line was sold and the proceeds went to the ‘Make-a-wish Foundation’, a non-profit organization and a hospital. Few people know that Emily Osment is the president of the anti-bullying movement STOMP Out Bullying. She is the sister of actor Haley Joel Osment, who starred in the highly acclaimed thriller ‘Sixth Sense’.

Emily Osment is a well-known actress. Emily Osment has a net worth of $3 million dollars as an actress and musician in the United States. Emily Osment is the younger sister of Oscar-nominated actor Haley Joel Osment, who is best known for her role in “The Sixth Sense.” She was born in 1992 in Los Angeles, California.