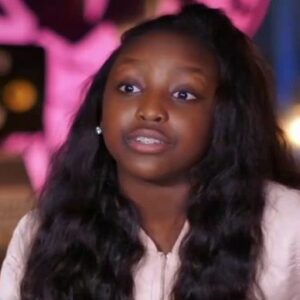 American rapper Flau’jae Johnson is most known for participating in the third season of the reality singing competition program “The Rap Game.” She has already had dozens of songs released, and she has performed on stage more than 200 times overall. She has always had a passion for singing and wants to follow in the footsteps of her late father, the late Jason Johnson nicknamed Camouflage, by becoming a successful rapper. The young rapper is incredibly enthusiastic and finds inspiration in her adored mother, who supports her in finding constructive ways to use her vocal skill. Flau’jae, the artist behind the popular album “Y’all Know Flau’jae,” is a very remarkable individual. She is a young woman who values experiencing life to the fullest. She is adamant about upholding her father’s heritage through her perseverance and diligence. On her YouTube channel, Flau’jae also posts her original music, covers, and music videos. She is also active on Twitter, Instagram, SoundCloud, and Facebook.

Flau’jae began singing when she was a very little child. She immediately had the opportunity to perform on stage because she is the daughter of a famous rapper. The footage of her very first public performance, which she gave when she was a young child, is also accessible on her YouTube account titled “Flau’jae Johnson.”

She carried on performing on stage and started to amass a devoted following. For her debut album, “Y’all Know Flau’jae,” which was published in 2013, she recorded for the first time. In order to show the world her talent, she also began touring. She has performed on tour with numerous well-known musical acts, including OMG Girlz and Mindless Behavior.

Flau’jae took part in the third season of the reality singing competition program “The Rap Game” in 2017, where she was one of five up-and-coming rappers. Her appearance on the program contributed to the young audience’s growing interest in her.

On November 3, 2003, Flau’jae Johnson was born in Savannah, Georgia, in the United States parents rapper Jason Johnson alias Camouflage and Kia Jones. Her mother was carrying her when her father was killed when he was just 21 years old. Yadon Moultrie is the name of Flau’jae’s brother.

She attends the Bible Baptist School as a student. The young rapper, who has a good heart, is connected to numerous charitable groups. She currently spends her free time coaching the less fortunate pupils at the Frank Callen Boys/Girls Club. Flau’jae further took part in the Chatham County Youth Commission Rally.

She contributes to the Feed the Hungry initiative. The young American artist is dedicated to putting an end to violence in her town after losing her father to street crime. She recently started the “Tragedy to Triumph” initiative to accomplish this goal. She shares her experiences and messages with the globe through the campaign, pleading for people to choose peace over violence.

One of the wealthiest and most well-known rappers is Flau’jae. Our investigation of Wikipedia, Forbes, and Business Insider revealed that Flau’jae’s net worth is $5 million.