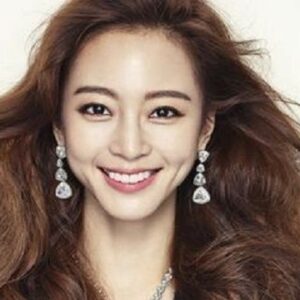 Han Ye-seul is a South Korean actress who has been in television shows such as ‘Couple or Trouble’ and ‘Birth of a Beauty,’ as well as films such as ‘Penny Pinchers’ and ‘Miss Gold Digger.’ She got her start in show business by winning the SBS Supermodel Contest in 2001. After a few years, she tried her hand at acting, landing a role in the popular TV series ‘Nonstop 4,’ which catapulted her to stardom. She became a naturalized South Korean citizen and relinquished her American citizenship after deciding to pursue her acting career in the Korean industry. Initially chastised for her acting abilities, Han went on to win honors and popularity for her roles in the TV series ‘Couple or Trouble’ and the film ‘Miss Gold Digger.’ During the filming of the TV series ‘Spy Myung-wol,’ she became embroiled in a controversy, which compelled her to take a three-year vacation from acting. Her reappearance was marked by a strong performance in the television series ‘Birth of a Beauty,’ for which she won several prizes. Other prominent TV programs that followed were ‘Madame Antoine’ and ’20th Century Boy and Girl.’

She went on to Cerritos College in Norwalk, California, where she earned an associate degree in Computer Graphics.
Han is not only fluent in Korean but also in English.

She won the SBS Supermodel Contest in 2001, which launched her career as a model in the world of beauty and entertainment.

In 2003, she debuted as an actress under the stage name Han Ye-seul in MBC’s popular South Korean comedic drama romance TV series ‘Nonstop 4’. It got her a lot of attention right away.
She also appeared in the music video for Wheesung’s song “With Me” in 2003. Rain’s song ‘Love Song’ (2010) featured her in another music video.

In 2004, she contributed to the music ‘You Are Different’ on the Nonstop 4 OST, which earned her a nomination for Best OST at the Mnet Asian Music Awards.

Han abandoned her US citizenship in 2004 and became a naturalized citizen of South Korea in order to pursue an acting career in the Korean industry.

She then starred in the South Korean drama ‘Forbidden Love’ as Chae-yi. From July 19, 2004 until September 7, 2004, the series aired on KBS2 for 16 episodes. In the same year, she had a cameo appearance as Han Ye-seul in the TV series Nonstop 5.

She also hosted the music program ‘MBC Gayo Daejejeon’ in 2004 and was featured in Track 11 of the compilation album ‘Winter Story 2004–2005’ by Korean musical group ‘Shinhwa’, titled ‘Say It.’ She also presented the MBC show ‘Section TV’ and the SBS show Inkigayo in 2004-2005. (Popular Music).

She then went on to play Han Eun-bi in the South Korean TV series ‘That Summer’s Typhoon,’ which ran from May 28 to September 4, 2005. She also contributed her voice to ‘Memory,’ Track 2 of That Summer’s Typhoon’s OST.
While ‘That Summer’s Typhoon’ did not perform well in the ratings that year, Han was chastised for her performance in both the series and ‘Forbidden Love.’ She was labeled as a commercial model rather than a true actress by critics.

Despite the criticism, Han kept working and proving her acting abilities in the popular South Korean romantic comedy series ‘Couple or Trouble.’ Han starred alongside Oh Ji-ho in the lead role of Anna Jo / Na Sang-shil in this weekend series.

Her superb performance and comedic timing in ‘Couple or Trouble’ earned her critical acclaim as well as multiple accolades. She received the Excellence Award, Actress, and Popularity Award, Actress at the 2006 MBC Drama Awards, where she also served as a host, and the Most Popular Actress (TV) award at the 43rd Baeksang Arts Awards in 2007.

‘Miss Gold Digger,’ a 2007 romantic comedy, was her big-screen debut. Her outstanding performance as Shin Mi-soo, who delves into the screwball comedy genre in the film, earned her a number of accolades, including Best New Actress at the 29th Blue Dragon Film Awards and the 45th Grand Bell Awards that year. She also contributed to the film’s single “Make Me Shine.”

Her next television series was ‘Tazza,’ a gambling romance drama based on Huh Young-manhwa man’s of the same name. From September 16, 2008 to November 25, 2008, it aired for 18 episodes and earned Han two SBS Drama Awards.

She got the titular character of Han Myung-wol in the 2011 South Korean romance action drama TV series ‘Spy Myung-wol’ after appearing as Han Ji-wan in the South Korean TV melodrama series ‘Will It Snow for Christmas?’
In August 2011, A was mired in a controversy when Han allegedly failed to show up for her scheduled shoot of ‘Spy Myung-wol,’ instead flying to Los Angeles the next day. Her agency, ‘SidusHQ,’ said that she and TV director Hwang In-hyuk were at odds.

Although she returned to Korea to start shooting on August 18, 2011, she was received with harsh criticism from both TV industry experts and viewers, with the exception of a small group of fans who blamed the frenetic Korean drama live-shoot method. She took a three-year sabbatical from acting as a result of this tragedy.

Meanwhile, her next big-screen film, the romantic comedy ‘Penny Pinchers,’ was released on November 10, 2011.

From November 1, 2014, through January 11, 2015, she made her comeback with the romance comedy TV series ‘Birth of a Beauty,’ which aired on SBS for 21 episodes. Her outstanding performance as Sara / Sa Geum-ran not only catapulted her back into the spotlight, but also earned her multiple awards, including the 2014 SBS Drama Awards’ Excellence Award for Actress in a Drama Special.

Moving on, she was nominated for a Top Excellence Award, Actress at the 9th Korea Drama Awards for her role in another South Korean romance comedy TV series, ‘Madame Antoine’ (2016).

She is currently seen in the romance comedy TV series ’20th Century Boy and Girl’ as one of the key roles of Sa Jin-jin.

Teddy Park, a Korean-American rapper, songwriter, and YG Entertainment record producer, with whom she had been dating since May 2013, reportedly broke up with her on October 24, 2016.

Han Ye-seul is one of the wealthiest TV actresses and one of the most popular. Han Ye-net seul’s worth is estimated to be $1.5 million, according to Wikipedia, Forbes, and Business Insider.