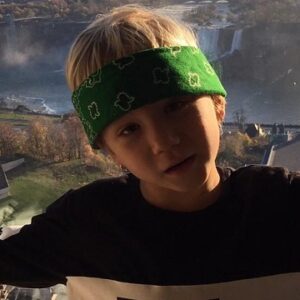 Jaxon Bieber is the adorable younger brother of Justin Bieber, a prominent Canadian musician. Despite his tumultuous pop career, Justin Bieber established a big fan base with his first single, ‘One Time,’ which only grew exponentially with his most popular track, ‘Baby.’ His celebrity not only changed his life as a teenager, but it also had an impact on his family, particularly his siblings, Jazmyn and Jaxon, who became overnight celebrities. Justin’s younger half-brother, Jaxon Bieber, is the son of Justin’s father, Jeremy, and his second wife, Erin, and is claimed to be quite close to him. Since Justin became an international star, his sister, Jazmyn, has also been in the spotlight. Even while being Justin’s younger brother helped Jaxon get famous despite being only a child, his unrivaled sweetness and astute attitude have helped him become a social media sensation on his own. Justin Bieber freely expresses his devotion for Jaxon by uploading sweet photographs of the two of them together, demonstrating their deep bond.

With his distinctively Bieber golden hair and deep, lovely eyes, Jaxon Bieber leads the list of adorable youngsters trending on social media. Beliebers, as Justin Bieber’s fervent admirers are known, are enamored with his charming looks and the harmless banter between him and Justin, which they partake in on a regular basis.

Jaxon accompanied his older sibling to the 2016 Grammy Awards ceremony when he was just six years old, and he looked exceedingly cute and elegant (much to the audience’s amusement) as he walked the Red Carpet. Crazy admirers have given Jaxon endearing nicknames like ‘Little Justin,’ ‘Little Bieber,’ and ‘Prince,’ and they don’t miss an occasion to show their love for him.

Jaxon has been exposed to a high-profile lifestyle since he was a baby, so he is used to the constant barrage of attention he receives and has handled it admirably. He now appears alongside other well-known Canadian Social Media stars, and every time he posts a photo or tweets about his personal life, his Twitter and Instagram accounts receive a massive response. By the way, as amazing as it may seem, Jaxon already has over 1 million Instagram followers and over 600,000 Twitter followers.

He must be endowed with wonderful genes, as he comes from a multi-talented family, and Beliebers can only hope that he follows in his elder brother’s footsteps and mesmerizes the world with his voice. Because of his growing interest in fashion and demonstrated sense of style, all of the major brands will be lining up to sign up little Bieber for endorsements very soon. His calm and assured demeanor distinguishes him from other boys his age, and he is setting a new standard for others to follow.

Jaxon Bieber was born in Canada on November 20, 2009, to parents Jeremy Bieber and Erin Wagner. Jaxon’s social media sites reveal that he enjoys traveling and discovering new locations, demonstrating his adventurous nature. He, like his older brother Justin, enjoys ice hockey and frequently posts images of himself playing the popular Canadian sport. He is a die-hard sports fan who never misses a good game.

Despite the media attention, Jaxon is a fairly grounded young man who prefers to live a normal life. He is a movie buff who watches all of the new films on a regular basis. Furthermore, one of his favorite pastimes is riding, and he enjoys participating in outdoor activities. His upbeat, upbeat personality makes him even more appealing, and his heavenly grin can lift anyone’s spirits. He adores his family and prefers to spend as much time as possible with them. He has a strong bond with both Justin and Jazmyn, as evidenced by the sweet and funny videos they share on social media.

As a Scorpio, Jaxon is ardent and passionate about whatever he is interested in, such as athletics, bicycling, movies, and so on. His zodiac sign is also responsible for his commitment and dedication to friends and family. It should come as no surprise that Jaxon is ambitious and focused on making his own name in life, and he is quite likely to exaggerate his current degree of celebrity. Despite the fact that he is constantly scrutinized by the media, he is composed and composed, and he knows how to live life without fear.

At the age of nine, Jaxon Bieber’s net worth is estimated to be between $1 and $5 million, according to Wikipedia, Forbes, IMDb, and other online sites. As a professional Instagram star, he was able to make money. He is a Canadian.