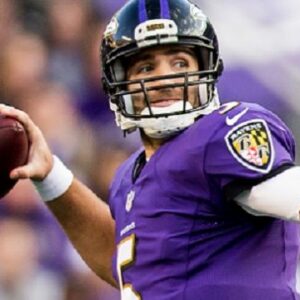 Joe Flacco, also known as Joseph Vincent Flacco, is a well-known American football player who is now the starting quarterback for the National Football League’s Baltimore Ravens (NFL). He has been a Ravens player since 2008. Joe played his first year of collegiate football at the University of Pittsburgh before transferring to the University of Delaware for his second. He was selected higher than any other University of Delaware player has ever been in the NFL draft. The finest season of his career had been 2014 when he threw for 3,986 yards, 27 passing touchdowns, 12 interceptions, and a passer rating of 91.0. In reality, during the past seven seasons, the Ravens’ pass offense has improved as a result of his performance. He has primarily played on run-first offenses throughout his NFL career. He became the first rookie quarterback in league history to win two away playoff games. He improved his performance over time and rose to the top spot in the Ravens’ record books for passing yards and touchdowns. MVP of Super Bowl XLVII, Joe Flacco committed to the Ravens in 2013 for a record-breaking six-year deal for $120.6 million.

Joe Flacco was born on January 16, 1985, to Karen and Steve Flacco in Audubon, New Jersey. Four of his five brothers—Mike, John, Brian, and Tom—are younger than him. He is the oldest of five children.
He participated in basketball, baseball, and football while attending Audubon High School. He served as the Green Wave’s starting quarterback during those times.

He relocated to the University of Delaware, where he began to compete in 2006. He completed 2,783 passes while representing the Fightin’ Blue Hens, racking up 18 touchdowns and 10 interceptions. Delaware, though, was not able to advance to the Football Championship Subdivision (FCS) playoffs.

As one of college football’s most accurate passes, he helped his club achieve an 8-3 regular season record in 2007. Division 1-A Navy, Delaware State Hornets, Northern Iowa Panthers, and Southern Illinois Salukis were some of his opponents in some of his best contests. However, the Appalachian State Mountaineers defeated his squad in the title game.

Joe Flacco was selected by the Baltimore Ravens in the first round of the 2008 NFL Draft, and in July he agreed to a five-year deal worth up to $30 million, with an $8.75 million guarantee.

Due to injuries to starters Kyle Boller and Troy Smith in the 2008 season opener against the Cincinnati Bengals, he was fortunate to start. Flacco managed 129 yards on 15 completions, but neither a score nor an interception was made. The longest rushing touchdown by a quarterback in Ravens team history was a 38-yard completion by him on the ground.

The Baltimore Ravens won their first game of the 2009 campaign against the Kansas City Chiefs. As a result of Flacco’s 307 passing yards and three touchdowns, both career highs, the Ravens broke their team record for most offensive yards in a game.

He passed for 248 yards and completed 52.6% of his passes in the Ravens’ victory over the New York Jets in the 2010 season opener. When the Ravens defeated the Cleveland Browns in December 2010, Flacco surpassed 10,000 passing yards for his career. He had a 93.6 passer rating at the end of the season, 3,622 passing yards, and 25 passing touchdowns.

2013 was Flacco’s worst season of his professional career. His passer rating of 73.1 was the lowest of his career, and he threw the fewest touchdown passes (19) and interceptions (22) since his rookie season. He was sacked 48 times, and as a result, he missed his first playoff game ever.

He was ranked number 58 on the NFL’s Top 100 Players list for the year 2014. However, the Ravens dropped their home opener against the Cincinnati Bengals that year for the first time since 2005. However, one of his best performances occurred in Week 6 against the Tampa Bay Buccaneers when he completed 21 of 28 passes for 306 yards, set a career record with five touchdown passes, had no interceptions, and had a passer rating of 149.7—the highest of the season.

He was offered the opportunity to play in the 2015 Pro Bowl as compensation for his outstanding performance during the 2014 season, but he was unable to accept the offer because his wife was expecting to give birth to their third child the same month. He was placed 97 in the 2015 NFL Top 100 Players, though.

For Flacco, 2015 was a terrible year. He has never begun a season with a 0-2 record throughout his time playing in the NFL. The Ravens had a 3-7 record at the end of the season, and Flacco had a passer rating of 83.1, 266 completed passes, 2,791 yards, 14 touchdowns, and 12 interceptions. His subpar performance prevented him from making the NFL’s annual Top 100 Players list.

He received a three-year extension from the Ravens in 2016. The Ravens defeated the Jacksonville Jaguars during the season and finished with a 3-0 record, their best after three games since 2009. They did, however, miss the playoffs for the second consecutive year. Flacco set a career-high throwing yardage record of 4,317 yards, and he also completed 436 passes, which was both a record for his team and a career-high.

Unfortunately, a back ailment forced him to miss the training camp in July 2017. He sustained an injury and had to exit the game midway against the Miami Dolphins on Thursday Night Football as well. But the Ravens prevailed in the match. Since the Super Bowl, some assert, he has devolved into an average player.

Joe Flacco won the XLVII Super Bowl and was named the game’s MVP (XLVII). He was the first rookie quarterback in NFL history to win two postseason games.

He was the Pepsi NFL Rookie of the Year in 2007 and the ECAC Player of the Year (in 2008).
He was the only quarterback to start and win a playoff game in each of his first five seasons, and he had accrued 36 postseason victories in his first three years.

Among the companies he has promoted are Nike and Reebok. He received endorsement contracts with McDonald’s and Haribo in 2013. Additionally, he advertised the “NFL Showdown: Football Manager” smartphone app from Zynga.

His three brothers also participate in various sports. In the 31st round of the 2009 Major League Baseball draft, the Baltimore Orioles picked Mike, who started at first base for the Frederick Keys. John participated in the 2013 Stanford vs. Army football game against the United States Corps of Cadets. In 2015, Tom was a quarterback for Western Michigan University.

Joe Flacco, a quarterback who won the Super Bowl, has an $85 million fortune. Joe Flacco has played for the Philadelphia Eagles, Baltimore Ravens, Denver Broncos, and New York Jets throughout his stint in the NFL. With the Ravens, Joe Flacco won a Super Bowl in 2013. He was selected by the Ravens in the first round in 2008, and he played with them through 2018. He spent one season with the Denver Broncos in 2019 before spending the following year with the New York Jets. Prior to being traded to the New York Jets in 2021, he began the season with the Philadelphia Eagles.