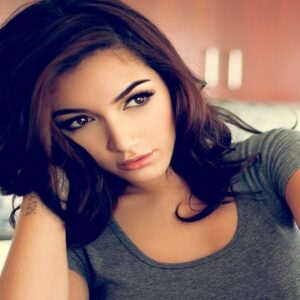 Misa Campo is a social media sensation and Canadian import model presently located in Los Angeles, California. She began her career as a sports car model, competing in the 2006 Montreal Sport Compact Performance Auto Show. In the same year, she was crowned Miss Rocawear Canada. She was featured in the September 2006 issue of ‘Maxim’ magazine as one of their “Show Us Something” females. Since then, she’s been featured in a variety of publications, including ‘Super Street,’ ‘Version C Models Magazine,’ ‘Uno,’ and ‘DragSport.’ In the December 2006 issue of DragSport magazine, she was selected Model of the Month. She was voted IGN DVD Babe of the Day in 2007. She made her acting debut in the Indonesian horror film ‘Pacar Hantu Perawan’ in 2011. She was featured on the cover of FHM magazine in February 2011 and was chosen as one of the FHM 100 Sexiest Women of 2011. In May 2013, she collaborated with one of her favorite photographers, Van Styles, on a photoshoot for SSUR Lookbook Summer 2013. She supports humanitarian causes and participated in Team District 10’s 8th Annual Breast Cancer Awareness Fundraiser Auto Show in October 2014, despite her fame as one of the most prominent car show models.

The Career of Misa

Misa Campo began her job as a bartender at Montreal’s prestigious Jet and System Night Club. She was offered modeling assignments during this time when her supervisor noticed her and encouraged her to try her hand at it.

She first modeled at Montreal’s annual racing car event Sport Compact Performance, which is one of the country’s largest. However, she began competing in beauty pageants in 2006, eventually becoming Miss Rocawear Canada in 2006.

She subsequently relocated to California to advance her modeling career, working as a bartender in a Los Angeles nightclub while hunting for modeling possibilities. Her modeling career took off after she posed for a number of high-profile publications, including Maxim and DragSport.

Misa Campo opted to come to Japan in 2008 after her initial success as a model, with the goal of becoming a singing celebrity. While no significant record label declared her debut into the Japanese music industry, she herself stated on her own blog that she had secured a record deal with a Japanese label.

The next year, she relocated to Japan for a six-month stint to establish her new career. She was hailed as a possible replacement for Leah Dizon, a Filipino-American model who relocated to Japan in 2006 to pursue a career as a singer.

Following Dizon’s decision to take a hiatus, her admirers began to consider Campo as an alternative. She was part Asian by origin (Filipino), although she didn’t speak the language and wanted to acquire it during her stay, as did her predecessor Dizon. However, she finally returned to Canada after her new job failed to excite her.

Misa Campo began her social media adventure by creating accounts on a variety of platforms, including Twitter, Instagram, and, eventually, YouTube. She is best known for the risqué photos she posts on her Instagram account, which have helped her gain a lot of attention on social media.

She has previously modeled for a number of magazines and appeared on a number of entertainment websites, but she hopes to one day be a Sports Illustrated swimsuit model.

Misa Campo, real name Michika Devieux, was born in Montréal, Quebec, Canada, on January 28, 1988. Her father is Filipino, while her mother is Dutch. She relocated to Newport Beach, California, with her father when she was two years old.

She spent much of her childhood in Newport Beach before returning to Montréal when she was ten years old. She shared an apartment with her mother and two sisters, Jen and Marie.

For a while, she continued to travel between Montréal and California. She even relocated to Japan for a time to pursue a singing career but returned to Canada later.

She is currently residing in the city of Los Angeles, California. Max Linder is rumored to be her long-term boyfriend.
According to Campo, she did not especially enjoy her high school life. She was a poor student who frequently skipped lessons, resulting in her expulsion from school on several occasions.

She had to re-enroll several times before graduating with honors. She believes she had the worst professors in school and didn’t make nearly enough friends.

She does recall, though, making a couple of excellent friends during her school years who have remained close to her over the years.

Misa Campo, a well-known model, has a net worth of roughly $1 million. Misa rose to prominence as a model for a number of publications.