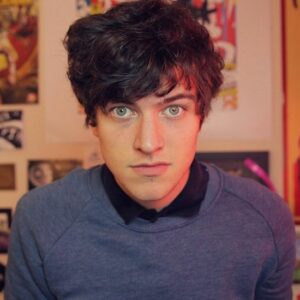 In a nutshell, PJ Ligouri is a rising YouTuber with over a million subscribers and counting. However, this young man is also a filmmaker, scriptwriter, producer, musician, and comic in a broader sense. Mr. Ligouri, you have way too many feathers in your hat! All we know for sure is that PJ has gone to show that no mountain is too high to climb and that anything is possible if you have the desire to succeed! And that’s exactly what Mr. Ligouri believes in- from viral short films to vlogging about everything that comes to mind, PJ’s channels are nothing short of a blessing! With two trending channels, KickThePJ and PJTheKick, you can say goodbye to boredom because once you plunge into his channels, there’s no coming back! Go ahead and watch one video to see for yourself—and be prepared to laugh uncontrollably!

Being a Creative Arts student with a knack for cinematography, it wasn’t long before PJ decided to turn his hobby into a full-time job, giving birth to one of the most popular channels, ‘KickThePJ.’ ‘KickThePJ’ has been producing some of the best short films with exceptional animation and content since its inception in 2007.

‘Make Art,’ ‘Chaos Theory,’ and ‘PJ’s Sandwich,’ all of which are over eight years old, are still some of the most talked about videos! And now, most YouTubers swear on ‘KickThePJ’ when it comes producing high-quality short films, especially after partnering and collaborating with some of the greatest names in the industry. After releasing the 10-minute film ‘Oscar’s Hotel,’ which centres around a youngster named Oliver and how he helps save the day, Ligouri’s channel saw a massive increase in traffic in 2014. The film was well-received by the audience, and in 2015, ‘Vimeo’ funded its 6-episode web series, which was co-produced by ‘New Form Digital’ and ‘The Jim Henson Company.’

Ligouri’s outstanding filmmaking abilities were noted, and before he could comprehend his newfound celebrity, his fans showered him with praise and adoration. All of this allowed him to expand his horizons, leading to the release of ‘Hair and Brimstone,’ a 16-minute short film about the dark and twisted exploits of three friends. PJ is the proud owner of another YouTube channel named ‘PJTheKick,’ which is all about randomness and pleasure, with an overdose of pure enjoyment. PJ Ligouri and his channels certainly deserve to thrive in this YouTube popularity, from vlogs involving other YouTubers to skits and sketches that will have you in fits of laughter!

What is it about PJ Liguori that makes him so unique?

For others, it’s PJ’s seamless ability to come up with the wittiest comebacks, while for others, it’s his tremendous talent as an entertainer, storyteller, and even comedian. PJ’s short videos stand out from the crowd because they contain elements of fantasy and psychedelia, which is what makes his channel popular with the general audience.

Because to PJ’s inexhaustible popularity, the entire YouTube community is clamoring for more flicks and humour. Even celebrities like PewDiePie refer to themselves as his admirers! Now, to take things to the next level, PJ is a member of the ‘Fantastic Foursome,’ a group of English YouTubers that includes Phil Lester, Dan Howell, and Chris Kendall.

PJ Ligouri was born in Peterborough, England, on December 11, 1990. For his short film assignments, he now frequently flies to LA. His family and personal life are largely unknown. PJ and his unusual sense of humor, as well as his love for movies, have unquestionably influenced the direction of short films on YouTube, as evidenced by his Virgin Media Award!

PJ Liguori is one of the wealthiest YouTube stars and one of the most popular. PJ Liguori’s net worth is estimated to be $1.5 million, according to Wikipedia, Forbes, and Business Insider.