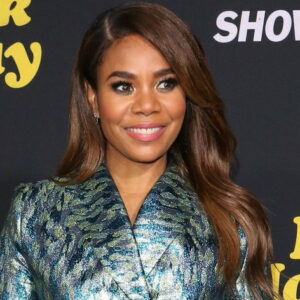 American actress and comedian Regina Hall is well-known for appearing in the first four installments of the well-known “Scary Movie” film series. She began her career as a journalist before branching out into acting in the early 1990s with the television drama “Loving.” She gradually rose to prominence as one of comedy’s most recognizable faces. In 1999, she made her cinematic debut in “The Best Man.” She has a number of minor appearances in movies and television shows, often as comic relief. But in 2000, when she starred as a sex-crazed crazy girl in “Scary Movie,” she experienced her highest professional success. Despite the fact that the critics outright rejected the movie, everyone praised her comedic timing, and the movie was a financial success. The first “Scary Movie’s” popularity opened the door for other parts of the “Scary Movie” franchise. She has also played several challenging and serious roles in the television series “Law & Order: NYPD” and the 1990 film “Law Abiding Citizen.” She has played a range of roles, but humor has always been her first love.

On December 12, 1970, Regina Hall was born to middle-class parents in Washington, D.C., in the United States. Her mother was a teacher, while her father was a constructor and electrician. Regina was raised in an African-American family. She’d loved writing since she was a little girl, and she wanted to be one.
Regina was a sensitive little girl who was easily influenced by unfavorable events in the outer world. She began writing comedy as a way to deal with this, albeit there was also a period when she experienced sadness. She began attending church in high school and adored meditation. She had dreamed of becoming a nun and living a serene life in the service of others.

She had no intention of making acting her full-time profession. She began studying journalism after graduating from high school and obtained her bachelor’s degree in English literature from Fordham University in the Bronx. Later, she enrolled at New York University for a journalism master’s degree.
Her father had a heart attack and died about this time. Regina suffered a severe blow as a result, and in order to deal with the tragedy, she put a lot of effort into her career. She started working hard to get a break in movies and TV since acting gave her the chance to entirely transform into someone else. As luck would have it, she struck it rich with it.

For fun, she had taken on a relatively minor role in the 1992 soap opera “Loving.” She played a very little part that no one could even detect. She put off her plans to become an actress in favor of focusing on her journalism profession.

In 1997, while working on her journalism master’s degree, she applied for and was chosen for a TV commercial. She then made a brief appearance in the comedy “The Best Man.” Despite having a relatively little part, numerous directors took notice of her presence. In an effort to support the anti-racism movement in Hollywood at the time, an increasing number of filmmakers began using African-American actors in prominent parts.

She also made an episode of the well-known police procedural drama “New York Undercover” that same year, giving her some exposure to the business.

Her biggest breakout performance was in the 2000 comic spoof “Scary Movie.” Although she was close to 30, she appeared in the movie as a high school student named “Brenda Meeks.” Her performance was praised, and the experts in the field called her comedy timing “excellent.”

Her acceptance into mainstream Hollywood led to some greater roles. After that, she made an appearance as “Coretta Lipp” in the hit television show “Ally McBeal.” Her rising fan base led the show’s producers to make her a series regular by the fifth season of the show, even though it was only intended to be a brief guest appearance in a few episodes.

She made a dramatic appearance in the 2002 movie “Paid in Full.” Directors started to consider her for main roles at this point because of her enormous increase in popularity. She played a key role in the comedy “Malibu’s Most Wanted,” which came out in 2003. Following that, he played other leading roles in movies like “King’s Ransom” and “The Honeymooners.”

She continued to play the part of “Brenda Meeks” in upcoming episodes of “Scary Movie” at this time. The franchise’s final installment was released in 2006.
She portrayed “Mrs. Xavier,” one of the X Men, in the 2008 comedic parody “Superhero Movie,” which poked fun at Hollywood’s rising trend of superhero movies.

She then made a striking appearance in “Law Abiding Citizen.” It was a somber drama focused on the conflict between man and the system. The movie, which starred Jamie Foxx and Gerard Butler as the main characters, was a huge hit.

She also made an appearance on “Law & Order: LA,” where she excelled as District Attorney “Evelyn Price.”

At this point, Regina revealed that she was a writer for the magazine “ABILITY.”
She portrayed “Candace” in the comedy movie “Think Like a Man” in 2012, and she later reprised the role in the two subsequent installments of the series, “The Best Man Holiday” and “Think Like a Man Too.” The popular book “Act like a Lady, Think like a Man” by Steve Harvey served as the inspiration for these somewhat successful movies.

In 2014, she collaborated on the movie “About Last Night” with renowned comedic actor Kevin Hart. The pairing of Hart and Regina was praised as the movie’s “sole saving grace” despite criticism that it wasn’t up to par.

Then Hall made appearances in movies like “Vacation,” “Girls Trip,” and “Naked.” She also continued to publish her writing in a variety of places.

Regina Hall maintains a low profile in her personal life. She is rumored to be bisexual, and she has dated actors Sanaa Lathan, Damon Wayans, and rapper Common in the past.

She began working as a volunteer for numerous NGOs that raised awareness of the rare auto-immune disease scleroderma in 2004 after learning that her mother had been diagnosed with it.
After a disastrous split in 2011, she wanted to give up everything and become a nun because she has a very sensitive personality.

American actress and producer Regina Hall has a $6 million net worth. The roles of Brenda Meeks in the “Scary Movie” film series (2000–2006), Corretta Lipp in the Fox television series “Ally McBeal,” Dawn Darcy in Showtime’s “Black Monday,” and Carmel Schneider in the Hulu miniseries “Nine Perfect Strangers” are probably Hall’s most recognized for (2021).