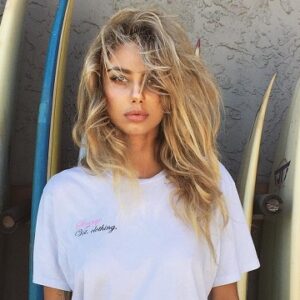 Sahara Ray is an Australian model and swimwear designer who rose to prominence after being photographed topless with Justin Bieber while on vacation in Hawaii. While the couple’s sensual photos dominated the news for weeks, there’s more to this gorgeous lady than just Justin Bieber’s ex-girlfriend. In addition to being a model, she is also a successful entrepreneur who sells her designs on her website, https://sahararayswim.com/. She also uses the gateway to convey the inspiration for her designs, which she does with the use of images and videos. Ray, who is also a social media star, is active on Instagram, where she has a devoted following of about 1.2 million people. Ray is on a roll right now, and there’s no stopping her! The hazel-eyed Australian beauty has signed with ONE Management and has quickly established herself as one of the company’s most promising models.

Sahara Ray has always understood the value and glory of being in the spotlight, having been born to a great surfer father. As a result, she dreamed of becoming famous as a child. Ray landed in Los Angeles after spending time in a variety of locations and pursuing a degree at the Fashion Institute of Designing and Merchandising. She rose to prominence after posting images of herself in a sexy bikini avatar on her Instagram account. Almost quickly, she became a phenomenon.

Ray found success as a model after completing her degree. She has modeled for companies including Volley. As a freelance swimsuit model, she soared to fame and was expected to become a major international celebrity, which she achieved. In addition, she developed her own swimsuit brand, which can be found at https://sahararayswim.com/. She offers a diverse swimwear selection to her clientele, ranging from penny tops to luna bottoms, sultry one-pieces to playful lace pairs.

Sahara Ray is well-known on social media and has amassed a sizable fan base; her Instagram account, where she is always seen in a swimsuit, has over 1.2 million followers. On Facebook, the blond beauty has more than 40 thousand fans. Ray earned a following as a result of her modeling engagements and designer label, but it was her topless shot with a nude Justin Bieber that catapulted her into the international spotlight. She drew the attention of gossip mongers and newshounds alike, who were eager to learn more about the ‘Nude Girl’ with Bieber.

Ray was born in Australia on March 10, 1993, to Tony Ray, a renowned pipe master and Australian surfing legend. Ray spent much of her childhood moving around the world, despite the fact that she was born in Australia. She spent three months of the year in Hawaii and grew up in Santa Cruz. She was later raised in Los Angeles.

Ray, like her father, was a surfer when she was a kid. Her passion for surfing eventually gave way to her passion for fashion. Finally, at the age of 16, she traded in her surfboard for design sketches and enrolled at the Fashion Institute of Design and Merchandising in Los Angeles. Ray became a social media phenomenon after posting beautiful topless bikini photos of herself on Instagram.

According to reports from 2018, Sahara Ray had a net worth of US $200,000, the most of which came from her modeling and design work. Her website, where she sells wonderful bathing outfits for women, generates a sizable profit for her.