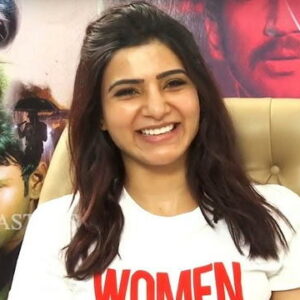 Samantha Akkineni is an Indian actress and model who has appeared in films in Tamil and Telugu. She started working as a model while she was still in school. Soon after, she began receiving offers for film roles. She made her Telugu cinema debut in ‘Ya Maaya Chesave,’ directed by Gautham Menon. She won the Filmfare Award for ‘Best Debut Actress’ for her performance. She rose to prominence in 2012 after starring in the fantasy film ‘Eega,’ for which she received the Filmfare Award for Best Tamil Actress. She is a well-known actress who has also won a number of significant accolades. She is well-known for supporting a variety of businesses and products as a well-known actress. In 2012, she founded Pratyusha Support, a non-profit organization that provides medical assistance to underprivileged mothers and children. Her foundation receives a large portion of her revenue.

Samantha Ruth Prabhu was born on April 28, 1987, in Chennai, Tamil Nadu, India, as Samantha Ruth Prabhu. Prabhu, her Telugu father, and Ninette, her Malayali mother, are her parents. She grew raised in the Chennai suburb of Pallavaram. Despite her multi-regional upbringing, she considers herself a Tamilian.

She attended Holy Angels Anglo Indian Higher Secondary School before enrolling at Stella Maris College in Chennai to pursue an economics degree. She began modeling near the conclusion of her undergrad years and quickly began acting in movies.

Samantha Akkineni made her film debut in ‘Ye Maaya Chesave,’ a love drama released in 2010. (What Magic Have You Done). The film, directed by Gautham Menon, was a commercial success, grossing Rs 20 crore on a budget of Rs 12 crore. For her performance, Akkineni received the Filmfare Award for Best Debut Actress. She was also nominated for a Filmfare Award for Best Actress in a Telugu Film in the South.

She appeared in two films in 2011: ‘Nadunisi Naaygal’ and ‘Dookudu.’ She was nominated for another Filmfare Award in the Telugu Best Actress category for the latter. She rose to international prominence after starring in the bilingual fantasy film ‘Eega’ in 2012. (The Fly). The film, directed by SS Rajamouli, was a big commercial success and was lauded by most critics.

In 2016, she got her fourth Filmfare Award for her portrayal in the romantic comedy ‘A Aa’ in the category of Best Actress – Telugu. The film, directed by Trivikram Srinivas, was a commercial success, grossing Rs 75 crores on a budget of Rs 35 crores.

She also appeared in other films in 2016, including ’24,’ which was a commercial hit and garnered several accolades. She was nominated for two more Filmfare Awards in the ‘Best Actress – Tamil’ category for her roles in ’24’ and ‘Theri.’

Samantha Akkineni rose to prominence after starring in the fantasy film ‘Eega.’ The story follows a young guy who reincarnates as a housefly in order to avenge his previous life’s death and protect his lover. The film, directed by SS Rajamouli, was a commercial success, becoming a hit not only in India but also around the world. The majority of critics’ reviews were also favourable.
’24,’ a 2016 sci-fi action film directed by Vikram Kumar, is another notable achievement of hers. Suriya appeared in three separate characters in the film, in addition to Samantha. Nithya Menen, Saranya Ponvannan, and Girish Karnad also appeared in the film. The film was a box office hit and received numerous accolades and nominations.

Thiagarajan Kumararaja directed the Tamil black comedy film “Super Deluxe,” in which she starred. Vijay Sethupathi, Ramya Krishnan, Fahadh Faasil, and Gayathrie were among the cast members. The film, which was released in March 2019, received largely positive reviews from critics.

After courting for over two years, Samantha Akkineni married Naga Chaitanya in 2017.
She is well-known for her philanthropic endeavors in addition to her performances. Pratyusha Support, her own charitable trust, was established in 2012.

Samantha Akkineni Net Worth is $12 millions.