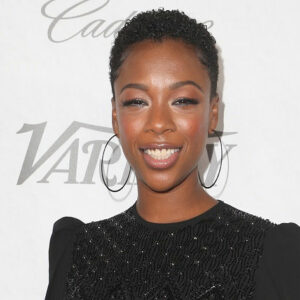 American actress Samira Wiley is renowned for giving outstanding performances in TV shows including “The Handmaid’s Tale” and “Orange Is the New Black.” While she won the “Screen Actors Guild Award” for “Orange Is the New Black,” her performance in “The Handmaid’s Tale” earned her a nomination for the prestigious “Emmy Award.” A nonprofit group called “Human Rights Campaign” honored her by giving her the “Visibility Award” in February 2015. Wiley has been in a few notable Hollywood productions, including “Rob the Mob” (2014) and “Nerve” (2016). She appeared in the drama movie “Being Flynn,” which starred Robert De Niro. Additionally, she has done modeling work and graced the cover of “Maniac Magazine.” Along with stars like Zachary Quinto, Ellen Page, and Sam Smith, she was on the cover of “Out Magazine.” She received the 2014 “Out Magazine” “Ingenue of the Year” award. The parents of Samira Wiley have always been in favor of her choices. The actress claims that they are responsible for her success.

On April 15, 1987, in Washington, D.C., Samira Wiley was born. Dennis W. Wiley and Christine Wiley, her parents, raised her. Aiyana Ma’at and Joshua Wiley are Samira’s two siblings.
Samira developed an early interest in acting. She attended the elite “Juilliard School” in New York City after graduating from “The Duke Ellington School of the Arts.” 2010 saw her graduate from the “Juilliard School.”

The career of Samira Wiley

She played Tina in the 2011 comedy picture “The Sitter,” which marked the start of her career with the general public. She also had the chance to play Maria in the stage version of Shakespeare’s play “Love’s Labor’s Lost” that same year.

Samira’s major break came when she was given the chance to play Poussey Washington in the television series “Orange Is the New Black” in 2013. She returned to the show in the second season after appearing in 12 episodes in the first. She became a regular in the series because her part was significantly featured this time.

She appeared in “Orange Is the New Black” for the entirety of the third season, and by the time the fourth season premiered, her character had taken center stage. She quickly established herself as a household name and developed a sizable fan base, which led to her eventual wide recognition.
Wiley acted in the 2014 criminal drama “Rob the Mob,” in which she portrayed Annie Bell, an agent. The movie did well at the box office and earned positive reviews.

She had an appearance in the 2015 season of the legal drama “Law & Order: Special Victims Unit.” Despite having a little part, her performance was praised by both the reviewers and the crowd.

The main character of Telltale Games’ video game “The Walking Dead: Michonne,” which was published in February 2016, was voiced by Wiley. For her work, she received a nomination for the “BTVA Video Game Voice Acting Award.” She appeared in many films that year, including “37” and “Nerve.” She also appeared in the TV shows “The Catch” and “You’re the Worst.”

She won praise from critics in 2017 for her role in the television drama “The Handmaid’s Tale.” The series was based on a Margaret Atwood book from 1985. Samira’s acting career benefited from the success of the online television series, which garnered numerous important prizes. She then continued acting in the same year, portraying Vanessa in the film “Detroit.”

She became established as an actress because of her modeling profession. She was a model for “PayPal” in 2014, and she afterward made the covers of a few well-known magazines.

She received the “Visibility Award,” given to her by the “Human Rights Campaign,” in February 2015.
For her work in “The Handmaid’s Tale,” she was nominated for the coveted “Emmy Award” in 2017. She received a nomination for “Outstanding Supporting Actress.”

On October 4, 2016, Samira Wiley declared her engagement to Lauren Morelli. For the television program “Orange Is the New Black,” Lauren wrote. On March 25, 2017, the couple exchanged wedding vows.

Samira’s first vehicle was a “Chevy Malibu.”
Italian town Positano is her favorite location.
While taking a shower, she enjoys singing gospel music.

Paulo Coelho’s “The Alchemist” is her favorite novel.
Lauren Morelli wrote the sequence in the television show “Orange Is the New Black” where her character is killed.

Salary and wealth of Samira Wiley: American actress Samira Wiley has a $3 million net worth. In April 1987, Samira Wiley was born in Washington, D.C. Her work as Poussey Washington in the Netflix series Orange Is the New Black is perhaps what makes her most well-known. Wiley received his education from the Juilliard School and the Duke Ellington School of the Arts. In 2011, she played the lead role in a performance of Love’s Labor’s Lost. She acted in the film The Sitter and had a recurring role as Gina in the television series Unforgettable that same year. She appeared in the 2014 film Rob the Mob as well as the 2012 film Being Flynn. She played Poussey Washington in the television series Orange Is the New Black, which is her most well-known role. During the 2013–2017 season of Orange is the New Black, Samira made appearances in 50 episodes. Orange Is the New Black garnered Wiley a Screen Actors Guild Award in 2015. Samira started making appearances in the acclaimed Hulu series The Handmaid’s Tale in 2017. Lesbian Samira got engaged to author Lauren Morelli of Orange Is the New Black in 2016. The couple wed in 2017.