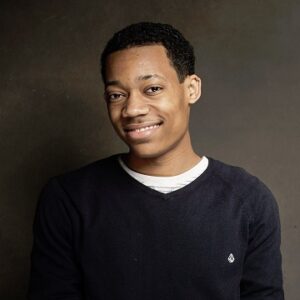 Tyler James Williams is an American actor, singer, film director, music video director and hip hop record artist. To add to his profile, he is also a trained martial artist. The actor has been in the industry for nearly two decades. He rocketed to stardom with the funny role of Chris on the sitcom, ‘Everybody Hates Chris’, where he exhibited a lot of varied character flaws. Progressing through the years, he took up tasks not only in front of the camera but also behind it as a director. By voicing ‘Firestorm’ in the animated series ‘Batman – The Brave and the Bold’, he added another feather to his bonnet. He has been nominated for various accolades throughout the past years, and received his first honor aged fourteen. Blessed with music and singing skills, he dazzled the audience with his performance in the Disney movie ‘Let it Shine’. At a young age he has performed hard roles such as Noah in ‘The Walking Dead’ and is presently playing the character, Russ Montgomery in the police crime thriller ‘Criminal Minds: Beyond Borders’.

Tyler Williams was born in Westchester County, NY on October 9, 1992. Angela and Le’Roy Williams’ first child. His musical abilities likely came from his mother, a singer and musician.

His father, though, was a cop. He grew up in the same neighborhood as his brothers Tyrel Jackson and Tylen Jacob Williams. All three brothers became actors.

As a Kid Actor

At four, he made his first television appearance as ‘Bobby’ in ‘Little Bill’. In 2000, he briefly replaced Devon Malik Beckford as the character.

Tyler starred in the children’s television series “Sesame Street” from 2000 to 2005. His talent as a young performer was praised, and he was handed the lead role in the sitcom ‘Everybody Hates Chris’.

‘Everybody Hates Chris’ made him famous. The 88-episode run lasted from 2005 until 2009. He grew as a performer on the show, his first major role in a TV series.

In the 2006 Christmas comedy ‘Unaccomplished Minors’ (Grounded in the UK and Ireland), he played Charlie Goldfinch. Despite the film’s failure, his performance was noticed.

In 2010, he mastered voice acting in ‘Batman: The Brave and the Bold’. His 2012 TV film ‘Let It Shine’ was a smash hit. He not only gave a fantastic performance, but he also played music in the musical theatre.
The media and critics loved the film. So he got another lead role in ‘Go On’ as Owen Lewis and a guest role in ‘Lab Rats’ with his younger brother Tyrel Jackson.

In Tina Gordon Chism’s 2013 comedy film Peeples, he played Simon Peeples. The film grossed about $9.3 million.
Mr. White People’, written and directed by Justin Simien. He was cast as the film’s lead. The film was about racial difficulties and discrimination as seen by African-Americans. It made nearly 4.6 million at the box office.

In 2016, he auditioned for and got the role of Russ Montgomery (Monty) in the police drama ‘Criminal Minds: Beyond Borders’. The show has 13 episodes in one season. He is now working on the show’s second season sets.

His most noteworthy role was Chris in ‘Everybody Hates Chris’. The American Film Institute named it one of the best ten television programs of 2007. The next year, ‘Common Sense Media’ gave it four stars.
His 2012 TV movie ‘Let It Shine’ got rave reviews. Tyler’s soundtrack was a hit, charting on various music charts. In the US Billboard Kid Albums and Rap Albums charts, it topped 13. US Billboard Soundtracks ranked it second.

Tyler was nominated for an NAACP Image Award in 2006 for ‘Outstanding Actor in a Comedy Series’ for ‘Everybody Hates Chris’.

For his role as Chris, he was also nominated for a Teen Choice Award and a Young Artist Award for Leading Young Actor (Comedy or Drama).
In 2007, he won the NAACP Image Award for ‘Outstanding Actor in a Comedy Series’ for his work in ‘Everybody Hates Chris’.

The next year, he was nominated for the same NAACP Award category. He was also nominated for ‘Best Performance in a TV Series – Leading Young Actor’ at the ‘Young Artist Awards’.
He was nominated for ‘Outstanding Actor in a Comedy Series’ at the NAACP Image Awards in 2009 and 2010. But he couldn’t win both times.

At the 2015 Black Reel Awards, he won ‘Best Breakthrough Performance’ for his part in ‘Dear White People’.

He is currently in Los Angeles with his brothers. He influenced both of his brothers’ careers as performers. His siblings portrayed him in ‘Everybody Hates Chris’.

He dated Keke Palmer in 2008, and the paparazzi trailed them for a year and a half till they split in 2010. He recently released a music video with singer-songwriter Karina Pasian.

Aside from being attractive, Tyler was not Chris Rock’s first pick to play Chris in ‘Everybody Hates Chris’. The Network insisted Tyler play the character or they wouldn’t make the show.

Williams, Tyler Tyler James Williams is an American actor and rapper worth $5 million. Born on October 9, 1992 in Westchester County, New York, he is most known for his roles in the Chris-Rock-inspired sitcom Everybody Hates Chris and the Disney Channel film Let It Shine.