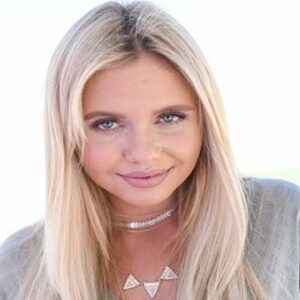 Young Australian Alli Simpson is a multitalented individual who established herself in the show business as an actor, singer, model, host, dancer, and fashion critic. She entered the entertainment industry as a result of inspiration from her actor, singer, and dancer brother Cody Simpson. She created the YouTube channel SoAlli and began publishing vlogs, beauty tutorials, cover songs, and interviews. Over time, the channel racked up millions of views and numerous subscribers. Millions of people watched the four singles she published on YouTube under her own record company, So Alli Records. She gained more notoriety by presenting her own radio program, “The Alli Simpson Show,” on “Radio Disney,” where she interviewed celebrities from the entertainment industry and gave callers guidance on a variety of topics. She was the youngest nationally syndicated radio host as a result of this achievement. The show became a huge success as a result of her special ability to connect with listeners and share tips and experiences with them. She worked for Macy’s, Delia’s, and imPRESS Nails for two successful years. She currently serves as the brand’s spokesperson. She has performed in the film “12 Dogs of Christmas Two: A Great Puppy Rescue,” on television in “Punk’d,” and in the IMO Girls YouTube series, among other projects.

She entered the entertainment industry as a result of her brother Cody Simpson’s success. She set the stage from the beginning by posting cover songs, beauty tutorials, vlogs, and interviews on YouTube. She established her YouTube channel, “SoAlli,” on November 11, 2009, and it gradually gained popularity. Over time, it amassed more than 60 million views and almost 500,000 subscribers.

While concentrating on music, she added another achievement to her resume when she created her own live weekly three-hour radio show, “The Alli Simpson Show,” at Radio Disney, making history as the youngest nationally syndicated radio host ever. She conducts interviews with prominent figures in show business, upcoming artists, and other individuals who have attracted attention.

Selena Gomez, Justin Bieber, James Bay, Nick Jonas, and Gwen Stefani are a few of the celebrities who appeared on her show. The unique way she interacts with her listeners and callers and shares her advice and experiences with them has made the show quite popular, garnering over 20 million listeners a week.

One of its interesting parts is where she addresses several topics like music, fashion, family, friends, and boys and connects with her audience and fans by interacting with callers on these subjects. She performed the international hits part of her program with OMI’s smash hit “Cheerleader,” making her the first US DJ to play the song on Radio Disney.

She will suit up as Radio Disney’s “Youth Engagement Officer” in a new persona. The damsel’s new and expanded function will involve helping the radio network inform and communicate about current issues, problems, and trends affecting young people. She will hold meaningful interactions with the youth and see to it that their voices are heard on all radio network platforms.

This multifaceted personality has had a successful modeling career thus far. She has inspired people by successfully navigating various career routes in the entertainment industry. She launched fashion presentations and in-stores across the country as part of Macy’s and Delia’s back-to-school marketing campaigns. She posed for the Love Pastry shoe firm and continued to be the face of ImPRESS Nails, where she just debuted her own range.

She currently serves as both Claire’s and Mudd Clothing’s face. This attractive and skilled actress has proven her acting chops. She appeared in the Sean Patrick Flanery-starring movie “12 Dogs of Christmas: Great Puppy Rescue” (2012), in the IMO Girls YouTube episodes of Awesomeness TV in 2013, and in the lead role of its comedy TV series “Hacking High School” in 2017.

She has also appeared in a number of other television shows, including “Piper’s Quick Picks,” “Nickelodeon Kids Choice Awards,” and “Punk’d.” Alli is becoming more well-known on social media sites other than YouTube, which is boosting her fame every day. Her Facebook page, “allimichellesimpson,” has already received more than 1.6 million likes, while her Twitter and Instagram accounts, both with the handle “Alli Simpson,” have racked up more than 1.5 million followers each.

She has continued to speak out against bullying and has participated in numerous similar campaigns. In fact, one of her first jobs was working for the anti-bullying group “Defeat the Label.” She also contributes to organizations that work to improve the lives of children. Among them include serving on the We Are Safe Foundation’s Teen Advisory Council and working as a Teen Ambassador for the Children’s Miracle Network.

She was a close member of Angie and Brad Simpson’s family when she was born Alli Michelle Simpson on April 24, 1998, at Gold Coast Hospital in Gold Coast, Australia. Tom and older Cody are her two brothers. She is also linked to Anneliese Simpson, a popular YouTuber. In her earlier years, Alli competed as a swimmer in Australia. She and her family moved to Los Angeles, California, in 2010 and are still there now.

This gorgeous diva enjoys relaxing at the beach, swimming, hanging out with friends, working out, eating, shopping, listening to music, singing, and dancing. Numerous sites identify Instagram star Tanner Zagarino as her romantic partner, despite the lack of information on her relationships and current dating status.

One of the wealthiest and most well-known pop singers is Alli. Our research revealed that Alli Simpson has a net worth of $5 million from sources like Wikipedia, Forbes, and Business Insider.