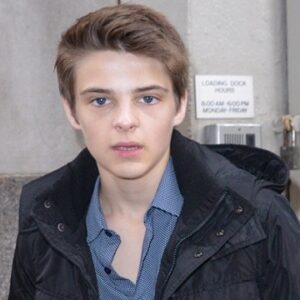 Corey Fogelmanis is a well-known actor in the United States. He is best known for his portrayal of ‘Farkle Minkus’ on Disney Channel’s hit TV series ‘Girl Meets World,’ as well as his part as ‘Young Louis’ on the TV show ‘Partners.’ Fogelmanis, who was born and reared in California, began acting as a child. He has already been in eighteen productions around the United States while still in his teens. Aside from theater and television productions, the outstanding young actor has also appeared in a few films. Not only does the teen actress enjoy acting, but she also enjoys photography, gymnastics, singing, and dancing. In terms of his internet fame, despite being a relative newcomer to the business of acting, Fogelmanis has managed to build a sizable fan base. He has 2.3 million Instagram followers and 271k Twitter followers as of June 2017. The teen is also highly famous on Facebook, with over 501k likes on his official profile.

When Corey Fogelmanis was six years old, he began acting on stage. Following that, he worked with a number of production companies and toured the country. His most recent appearance was at The Pasadena Playhouse in Southern California. Fogelmanis had his debut on-screen appearance in 2011 with the short film ‘The Maiden and the Princess.’ He made his TV debut as ‘Young Louis McManus’ in the sitcom ‘Partners’ a year later.

In 2014, the teen actor had his breakout role in Disney Channel’s ‘Girl Meets World,’ playing the character of ‘Farkle Minkus.’ Fogelmanis had a guest appearance in the series ‘I Didn’t Do It’ the following year. He starred as ‘Max Doyle’ in the horror comedy fantasy film ‘Mostly Ghostly 3: One Night at Doom House’ in 2016. In February 2017, he made his debut as ‘Van’ in Worst First Kiss Productions’ first ever project, ‘Dog Sees God.’ In 2017, he was also cast in the drama film ‘#SquadGoals.’ On social media networks such as Instagram, Twitter, and Facebook, the young actor has a sizable fan base.

Shannon and Dain Fogelmanis gave birth to Corey Fogelmanis on August 13, 1999 in Thousand Oaks, California. Baylee, his younger sister, is his only sibling. The actor currently shares a home with his parents, sister, two dogs, and a cat. He began acting on stage when he was just six years old. In 2011, he went to New York City for the Broadway Artists Alliance Intensive Workshop. When it comes to his personal life, Fogelmanis is said to be dating his ‘Girl Meets World’ co-star Sabrina Carpenter.

He is currently pursuing his acting profession and intends to attend college in the near future. Aside from performing, the youthful star practices photography and spends a lot of time with his pets and other animals at local rescue groups.

The young actor makes a good living as a professional actor. He has not, however, divulged his exact income to the press. According to reliable sources, Corey earns between $4000 and $6667 per post on his Instagram feed. His net worth is estimated to be approximately $2 million. In California, he and his family live a luxurious lifestyle.