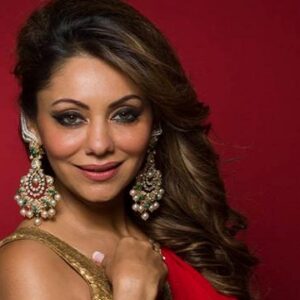 Gauri Khan is an Indian film producer, costume designer, and interior designer who was born Gauri Chibber. She is well known as the Bollywood superstar Shah Rukh Khan’s wife. She is a co-owner of ‘Red Chillies Entertainment,’ a film production firm that also distributes films. ‘Main Hoon Na,’ ‘My Name Is Khan,’ ‘Om Shanti Om,’ ‘Chennai Express,’ ‘Ra.One,’ ‘Happy New Year,’ ‘Raees,’ and ‘Dilwale’ are among Khan’s film production credits. She has completed various projects as an interior designer, one of the most notable of which was a commercial project including a 60,000-square-foot private mansion. Sussanne Khan, actor Hrithik Roshan’s ex-wife, collaborated with her on this project. The multi-talented woman has also starred in a number of advertisements and posed for a number of high-end periodicals, as well as fashion brands and companies. Khan also owns ‘The Charcoal Project,’ a furniture business that she co-owns with Sussanne Khan. She is also the sole proprietor of Design Cell, an interior design firm.

A Filmmaker and Producer’s Career

Gauri Khan and her husband founded Red Chillies Entertainment, a film production and distribution firm, in 2004. She later made her Bollywood debut as a producer with the film ‘Main Hoon Na.’ She went on to co-produce another film, ‘Kaal,’ in 2005. In the same year, she directed the film ‘Paheli.’ She received numerous honors and accolades as a result of this film. Khan then released ‘Om Shanti Om’ in 2007. In 2009 and 2010, ‘Billu’ and ‘My Name Is Khan’ were released, respectively. She directed two films in 2011, ‘Always Kabhi Kabhi’ and ‘Ra.One.’ Khan co-produced ‘Student Of The Year’ a year later, after which she directed ‘Chennai Express,’ ‘Happy New Year,’ ‘Dilwale,’ Dear Zindagi,’ and ‘Raees.’ ‘Jab Harry Met Sejal’ is her most recent film as a producer.

Gauri Khan began her career as a model and television personality in the 1990s, when she hosted MTV’s ‘Oye,’ a weekly Bollywood music countdown show. Years later, in 2008, she starred in a television commercial for D’décor, a home goods firm. In the same year, she was featured on the cover of the high-end magazine ‘Vogue’ as the ‘First Lady of Bollywood.’ Khan walked the runway at HDIL India Couture Week in 2009 alongside producer/director Karan Johar. She is also the face of the fashion line ‘Aftershock.’

As a professional interior designer

Gauri Khan was born Gauri Chibber in New Delhi, India, on October 8, 1970. Her parents are Savita and Ramesh Chandra Chibber. Vikrant Chibber is her brother’s name. She attended Delhi’s Loreto Convent School and Modern School. She went on to Lady Shri Ram College for her bachelor’s degree. She also completed a six-month fashion design degree at the famed NIFT fashion design college. She married Shah Rukh Khan on October 25, 1991. Aryan, Suhana, and AbRam are the couple’s three children (born via surrogacy).