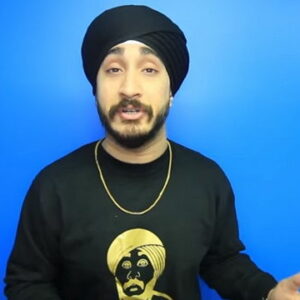 A Canadian comedian and YouTuber by the name of Jus Reign is Jasmeet Singh Raina. He became well-known online in 2009 thanks to the funny videos he posts to his JusReign YouTube channel. He also manages a secondary channel called JusVlogs where he posts vlogs about his daily activities. The 2016 Next Media Award for YouTuber of the Year went to Singh. With around one billion loops, he was also well-known on Vine. He also has one of the biggest fan bases on the social media platform Snapchat. Speaking of Singh’s YouTube channels, as of April 2018, his primary channel had more than 895k subscribers. There are around 150 million views on this channel. JusVlogs, his side channel, has received over 171k subscribers and over 24 million views so far.

In 2009 and 2011, respectively, Jasmeet Singh Raina launched his channels JusReign and JusVlogs. Most of his videos feature pop culture parodies and funny material, but some also make statements on race or detail his experiences with racism.

The YouTuber is also one of Much Digital Studios’ founding founders. He appeared in two films in 2015, one of which was shot in India. Singh worked as the red carpet correspondent for the Much Music Video Awards that year.

After that, he was invited to contribute as a guest writer to the newspaper “24 Hours Toronto,” where he wrote about the hottest venues to hang out in Toronto. Singh met with stars including Tyler Posey and Shemar Moore while co-hosting the iHeartRadio Much Music Video Awards red carpet event on June 19, 2016. He appeared on the well-known talk show “Jimmy Kimmel Live” that same month.

Jasmeet Singh Raina was made to take off his turban at a San Francisco airport on February 22, 2016. He obeyed, taking removing his turban in a separate room after being instructed to do so or book another trip. The YouTuber requested access to a mirror so he could reapply the turban in private after passing a security check. However, the security guards refused, advising him to cross the terminal to a washroom and use a mirror there instead.

This incident sparked a lot of criticism on social media and made news abroad in publications like “Seventeen,” “Cosmopolitan India,” and “New York Daily News.” A TSA official clarified the procedures for checking religious clothing in a statement, but he did not express regret to Singh.

On November 4, 1989, Jasmeet Singh Raina was born in Guelph, Canada. His brother’s name is Anmol. There is no information available about his other family members or romantic relationships.

Regarding the YouTuber’s educational background, he attended the University of Guelph with the intended goal of fulfilling his parents’ ambition for him to become a doctor. He ultimately made the decision to focus on YouTube as a full-time job, though.

Jus is one of the wealthiest and most well-known video bloggers. Our research of Wikipedia, Forbes, and Business Insider revealed that Jus Reign has a net worth of $5 million.