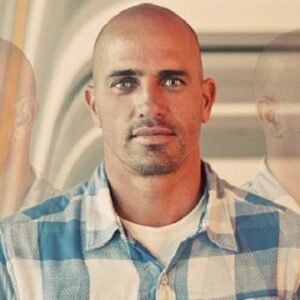 Kelly Slater is a well-known professional surfer from Florida, United States, who is best known for winning the ASP World Tour 11 times in a row. He won it for five years in a row, beating the record set by surfer Mark Richards. He’s also won a slew of other titles, including the ‘Boost Mobile Pro,’ ‘Billabong Pro,’ and ‘Rip Curl Pro,’ to name a few. This gifted athlete is more than simply a surfer; he has a wide range of hobbies, including music and movies. Kelly has appeared in nearly 37 films and documentaries, including ‘Surf’s Up,’ ‘Endless Summer II,’ ‘Down the Barrel,’ and ‘Fighting Fear,’ to name a few. He’s also remembered for a brief appearance on the popular television show ‘Baywatch.’ Aside from acting, Kelly Slater has experimented in writing, first with an autobiography named “Pipe Dreams: A Surfer’s Journey” and then with a joint effort titled “Kelly Slater: For the Love.” This well-known surfer is also a humanitarian and a supporter of the environment. Because of his passion for the waters, he is not only worried about marine life, but also works to raise awareness about suicide prevention. He is a member of the ‘Sea Shepherd Conservation Society’ and ‘Surfers Against Suicide’ groups. Continue reading to learn more about his life, works, and accomplishments.

Robert Kelly Slater was born on February 11, 1972, in Cocoa Beach, Florida, parents Stephen and Judy. Kelly has two siblings, Sean and Stephen, who are of Syrian-Irish origin. Slater grew up loving surfing and spending much of his time at the beach, thanks to his father, who operated a fishing business. He had established himself as a skilled surfer by the time he was an adolescent.

The teenage surfer had proven his mettle in the sport by 1990, and he began to feature in surfing magazines. Since then, he has been supported by prominent surfwear manufacturers, such as ‘Quicksilver,’ until recently, when he inked a contract with ‘Kering.’

In the same year, he won the ‘Body Glove Surfbout,’ a contest held in California. As a result of his achievement, he was cast as Jimmy Slade in the TV show ‘Baywatch.’ He also starred alongside Mike Cruickshank in the Bill Delaney-directed film ‘Surfers – The Movie.’

He won the ‘Association of Surfing Professionals (‘ASP’) World Tour’ two years later, in 1992. At the ‘Rip Curl Pro Landes’ in France and the ‘Marui Pipe Masters’ in Hawaii, he replicated his winning performance. The year 1994 was equally beneficial for this talented surfer, as he won competitions like as the ‘ASP World Tour,’ ‘Rip Curl Pro,’ ‘Chiemsee Gerry Lopez Pipe Masters,’ ‘Bud Surf Tour Seaside Reef,’ and ‘Sud Ouest Trophee,’ to name a few.

This energetic athlete won the ‘ASP World Tour’ for the second time in 1995, as well as the ‘Quiksilver Pro’ in Indonesia, the ‘Chiemsee Pipe Masters’, and the ‘Triple Crown of Surfing’ in Hawaii. He completed his hat-trick the following year, winning the ‘ASP World Tour’ in 1996. The ‘Coke Surf Classic,’ ‘Rip Curl Pro Hossegor,’ ‘Quiksilver Surfmasters,’ and ‘CSI presents Billabong Pro’ were among the other global championships he competed in around the same period.

Slater won his fifth ASP World Tour title in 1997, breaking Australian Mark Richards’ record as the most successful surfer in history. He also won the ‘Tokushima Pro’ in Japan, the ‘Kaiser Summer Surf’ in Brazil, and the ‘Grand Slam’ in Australia.

In 1998, Slater won the ‘ASP World Tour’ for the sixth time, as well as the ‘Billabong Pro’ and the ‘Triple Crown of Surfing.’ In the following year, he won the ‘Mountain Dew Pipeline Masters,’ which was held in Hawaii. He won events including the ‘Gotcha Pro Tahiti,’ ‘Billabong Pro,’ and the ‘Nova Schin Festival’ during the next three years. Kelly self-published his autobiography, ‘Pipe Dreams: A Surfer’s Journey,’ in 2003.

Slater competed in and won the ‘Snickers Australian Open,’ ‘Energy Australia Open,’ ‘Boost Mobile Pro,’ ‘Globe Pro Fiji,’ and ‘Quiksilver Pro’ from 2004 to 2006. He also took first place in the ‘ASP World Tour’ on two times. He broke Tim Curran’s record of winning the most career events after his victory in the 2007 ‘Boost Mobile Pro.’ The following year, he collaborated with legendary Australian surfer and writer Phil Jarratt on a book titled “Kelly Slater: For the Love.”

Kelly was honored by the United States House of Representatives on May 8, 2010, following his victory in the ‘Rip Curl Pro’ event, which was created by Bill Posey, for his essential contribution to sports.

Kelly is currently dating model and designer Kalani Miller, and the surfer has a daughter with a former girlfriend, Tamara, named Taylor. The American surfer is so well-known that a computer game in his honor was released in 2002. The game, dubbed ‘Kelly Slater’s Pro Surfer,’ was created by Treyarch and distributed by Activision.

Slater is a member of the Board of Advisors of the ‘Sea Shepherd Conservation Society’ on San Juan Island, USA, and campaigns for the conservation of marine life. Through a group named ‘Surfers Against Suicide,’ he also speaks out against suicide, denouncing the act and offering financial and emotional support to individuals who have attempted it.

Kelly Slater is a professional surfer from the United States with a net worth of $25 million. Slater, who is known for his prowess and style, has won the World Surf League 11 times, a record that no other surfer has been able to match. He was the youngest surfer to win the championship at the age of 20, and the oldest at the age of 39.

This athlete formed a music group called ‘The Surfers’ with his mates Rob Machado and Peter King. In 1998, the band released an album called ‘Songs from the Pipe.’