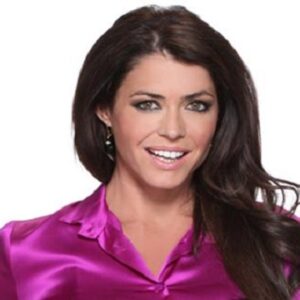 Pamela David is an attractive Argentinian model, TV host, and voice actress. Because of her curved, voluptuous form, gorgeous skin, and glossy hair, the attractive young girl found great success as a model. Her presence on the reality TV show ‘Ricardo Pieiro Modeling Agency’ (The Tavern) transformed the path of her career and catapulted her into the spotlight. Many modeling agencies and men’s publications, including the Argentine edition of ‘Playboy,’ were drawn to her sultry appearance, particularly her naturally large and gorgeous breasts. Her popularity surged to new heights once she was featured on the cover of an issue of ‘Playboy.’ She began to receive more modeling opportunities, as well as invitations to appear on television shows. The aspirational model used every opportunity to advance her career and went on to anchor television shows. In 2006, she was a panelist and judge at Via del Mar’s XLVII International Song Festival. She’s also done some voice acting and has worked in the theatre. She is currently a co-hostess on ‘Desayuno Americano’ on América TV.

As a young girl, Pamela David developed an early interest in modeling. She entered and won multiple beauty pageants as a teenager because she was attractive, personable, and self-assured. After winning the regional contest for the ‘Tourism Queen,’ she began to seriously pursue modeling as a vocation. Her goal was boosted even more when she later won the title of ‘National Queen of Tourism in Argentina.’

Despite her passion for modeling, the young lady decided to pursue a college education first. In 1998, she came from Santiago del Estero to Buenos Aires to study business administration. She did not, however, stay in college for long because she did not enjoy her academics. She took a risk and dropped out of college to pursue a full-time modeling job.

In 2001, she was cast in the reality television show ‘Ricardo Pieiro Modeling Agency’ (The Tavern). The busty beauty was recognized for her gorgeous body and was awarded a cover model spot in the Argentine edition of ‘Playboy’ magazine. Her fame skyrocketed as a result of this appearance, and her career soared to new heights. She was soon inundated with new modeling assignments and television proposals.

She went on to anchor the sexual show ‘Pamela Sex,’ which aired on the Playboy TV cable channel after a few comic roles on television. This only added to her image as a sex symbol. She’s also worked as a presenter on the TV show ‘Fuera de Foco,’ and she played herself in two episodes of ‘Noche de Juegos’ and one episode of ‘De Pé a Pá.’

Pamela David gave the Latin voice for Pamela Anderson’s cartoon character ‘Stripperella’ in the same-named series as a voice actress. She’s also a theatre performer, having appeared in the piece ‘Dancing with Cobos’ alongside Nito Artaza. She is currently co-hosting the morning show ‘Desayuno Americano’ on América TV with Diego Pérez.

Pamela David was born in Córdoba, Argentina, on October 6, 1978, to DyD owner/producer Alberto David. Pamela traveled to Buenos Aires for higher education after the family lived in Santiago del Estero for a few years. Bruno Lábaque, a basket player, with whom she began a relationship in October 2005 and married in March 2008. The pair has a child together. However, the marriage did not last long and ended in divorce. Pamela married businessman Daniel Vila in 2011 and they have a daughter together.

Pamela David’s net worth is believed to be $ USD 6 million, with her primary sources of income being Playboy Playmate, television presenter, model, Vedette, and actor. We don’t have enough information about Pamela David’s cars or lifestyle.