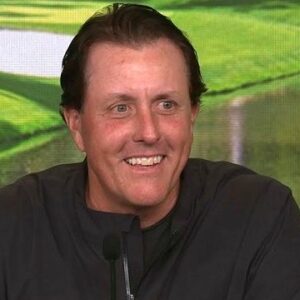 Phil Mickelson is one of the most successful professional golfers in the United States. Except for the ‘US Open,’ where he has finished second a record six times, he has won every major championship. He is known for his powerful, but imprecise, drive, which is more than compensated for by a superb short game. Despite being right-handed, he possesses a distinctive left-handed swing. At the youthful age of 20, he won a ‘PGA Tour’ event as an amateur. Despite being ranked second on the PGA Tour, his earnings from endorsements vastly outnumber his profits from the game. Among the brands he has sponsored include ‘Rolex,’ ‘Callaway Golf,’ and ‘Ford.’ His annual earnings were reported to exceed $ 42 million in 2007, making him one of the world’s highest-paid golfers. He was inducted into the ‘National Italian American Sports Hall of Fame,’ and he won the ‘ESPY’ for best male golfer in 2004. He has played in 11 ‘Ryder Cup’ matches and 12 ‘Presidents Cup’ matches for his country, which he considers a big honor. He has three children with his wife, Amy McBride. Despite his hectic golf schedule, Mickelson has always prioritized his family and has donated a significant percentage of his earnings to charity.

Phil Alfred Mickelson, also known as Lefty, was born in San Diego, California, parents Philip and Mary Mickelson on June 16, 1970. His father was a fighter-jet pilot in the Navy who later became a commercial airline pilot. He grew up in the cities of San Diego and Scottsdale, Arizona.
He learned to play golf from his father, who brought him out twice or three times a week. Despite being a right-handed child, he played the sport left-handed in their garden, emulating his father. His parents encouraged him to take up golf by utilizing his father’s airline profession to help him compete in various events, and his mother chipped in by getting a job to help with the costs.
He graduated from the ‘University of San Diego High School’ in 1988 and moved on to Arizona State University in Tempe to study psychology on a golf scholarship. He began playing amateur golf as a teenager and went on to win three National Collegiate Athletic Association (NCAA) championships and three Haskins Awards before becoming the face of amateur golf in the United States by 1992. During his undergraduate career, he equaled Ben Crenshaw’s record of 16 individual ‘NCAA’ championships.
He was the first left-handed golfer to win the US Amateur and the second collegiate golfer to win the All American Amateur four years in a row.
His greatest accomplishment as an amateur was winning his first PGA Tour event at the age of 20 in 1991. Steve Loy, his college coach, caddied for him that day and eventually became his business manager and mentor. He is the fourth and final amateur to win on the PGA Tour. As an amateur, he competed in a few more professional tour events but was unable to match his success. In 1992, he graduated from ‘Arizona State University’ and began his professional golf career.

Mickelson was excused from the professional golf certification process due to his PGA Tour victory in 1991, which was valid for two years. In 1992, he hired Jim “Bones” Mackay as his caddy and went on to play on other ‘PGA’ tours over the next few years. Many of these tournaments were won by him, including the ‘World Series of Golf’ (1996), the ‘Colonial National Invitation’ (2000), and the ‘Greater Hartford Open’ (2001). (2001 and 2002).
He won the ‘Buick Invitational’ in 2000, ending Tiger Woods’ six-year winning streak on the ‘PGA’ tour. However, he had never won a major and was known in golf circles at the time as the “greatest golfer never to win a major.”
At the age of 33, he finally broke the major jinx in 2004, when he won the 68th ‘Masters Tournament’ at the ‘Augusta National Golf Club’ in Georgia. He became only the third left-handed golfer in history to win a ‘Masters Tournament.’
After winning the ‘Masters,’ he had an all-time career low until 2005, when he won his second major championship at the ‘PGA Championship’ at Baltusrol. After winning the ‘Masters’ in 2006, his third major championship, he was rated second on the ‘Official World Golf Ranking’ list in 2007. This was his highest position in his professional life.
He was on track to join Tiger Woods and Ben Hogan as the only players to win three majors in a row, but his performance dipped at the 2006 ‘US Open’ at Winged Foot, when he tied for second place with Geoff Ogilvy, one shot behind.
He won the ‘Deutsche Bank Championship’ two shots ahead of Tiger Woods in 2007. He won the ‘Crowne Plaza Invitational’ at Colonia the following year, beating Tim Clark and Rod Pampling.
In 2009, he won his first ‘World Golf Championship’ by one stroke over Nick Watney at the ‘WGC–CA Championship.’ He had won the ‘Northern Trust Open’ at Rivera earlier that year, putting him in second place on the ‘PGA Tour’ wins tally with 35 victories.
Despite repeated gaps in his golfing career owing to his wife’s and mother’s cancer treatments, he kept his ranking at one spot behind Tiger Woods in 2009 by winning the ‘Tour Championship’ and the ‘WGC–HSBC Championship.’
He was diagnosed with psoriatic arthritis the following year. However, he continued to play golf and won the ‘Shell Houston Open,’ putting him in third place in the world rankings, while Tiger Woods had dropped to seventh. After recovering from two hernia surgery in 2016, he won the ‘CareerBuilder Challenge’ and was chosen the captain’s pick for the 2017 ‘Presidents Cup.’

He has a wife named Amy McBride. Phil’s ‘PGA Tour’ schedule was put on hold indefinitely after Amy was diagnosed with breast cancer in 2009. Amanda, Sophia, and Evan are their three children. When a month, he returned to play after doctors informed him that the cancer had been identified early and could be cured. He did, however, take a break from golf to attend to his mother’s breast cancer treatment at the same hospital.
When it came to professional golf, he has always put his family first. He has always maintained a good relationship with his parents and has shared his achievements with them.
In 2010, he was diagnosed with psoriatic arthritis, for which he had medical therapy. To assist him fight the sickness, he became a vegetarian. In 2016, he also underwent two hernia surgeries, yet he continued to play golf.
Mickelson is well-known for his compassion. He agreed to support the schooling of one of his children after hearing the story of a retired golfer and his struggle to make ends meet. He has donated a considerable portion of his money to military and children’s welfare projects. When he had to play with younger players, he became aware of his weight and began exercising with Sean Cochran in an effort to shed twenty pounds in order to remain competitively fit.
Insider trading in ‘Clorox’ and ‘Dean Foods’ stocks was probed. However, there was no evidence of misconduct against him.

Phil Mickelson has a net worth of $400 million.

Mickelson resigned up his long-standing contract with ‘Titleist’ golf equipment in 2004, just before the ‘Ryder Cup,’ and switched to ‘Callaway.’
He switched coaches after becoming dissatisfied with his tee shots. He fired Rick Smith and replaced him with Butch Harmon, Tiger Woods’ longtime coach. In 2016, he parted ways with Butch Harmon and signed Andrew Getson as his coach.
His tee shot once shattered a spectator’s watch, so he paid him $200.
He’s one of just three golfers in history to win both the NCAA Championship and the US Amateur Championship in the same year. Jack Nicklaus and Tiger Woods are the other two.
He has always considered it the greatest honor to represent his country in an international event. He has played in 11 Ryder Cup matches and 12 Presidents Cup matches for the United States.