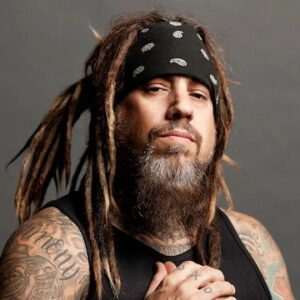 American musician Reginald Quincy Arvizu, often known as “Fieldy,” is best known for playing bass for the “nu metal” band “Korn.” He is well known for being the guitarist for the American rock group “StillWell.” Fieldy is in charge of coming up with the names for the albums the band publishes as well as bringing together all of the current members of the band “Korn.” He sees himself as “a drummer with the bass guitar” and has a distinctive playing technique. Using the bass as a percussion instrument in his characteristic manner causes it to sound more like a drum than a bass guitar. He also acknowledges that the majority of the bass lines he writes are influenced by hip-hop music, which has a strong influence on him. He also handles all of the band’s connected sales and purchases.

From their school days together, Brian Welch, one of Korn’s guitarists, and Reginald Arvizu were pals. During their time as students, they collaborated in different bands. Following graduation, the two of them traveled to Los Angeles together with Korn’s other guitarist James Shaffer and drummer David Silveria. They first started out as a group called “Laughing As People Die,” which is an acronym for “Love and Peace, Dude,” but eventually altered it.

The band was able to secure a record deal. However, the band didn’t really find popularity until they added singer Jonathan Davis and changed the band’s name to “Korn.” Field plays a five-string Ibanez model SDGR SR1305, and he has honed a signature approach that incorporates left-hand muting, standard finger-style plucking, and bass slapping. He has successfully set his band apart from other bands in the same genre with his usual tuning of “A, D, G, C, F,” which produces a distinctive sound.

He credits several renowned musicians and bands that have impacted him since his school days for his accomplishment. Michael Peter Balzary of the musical group “Red Hot Chili Peppers” has had a big influence on him.

Since the beginning of the group’s existence, Fieldy had been a regular. But in 2012, he made the decision to take a hiatus because he and his second wife were expecting their first child.

He enjoys hip-hop and, in addition to being affiliated with Korn, has started his own hip-hop project. His rap group, Fieldy’s Dreams, already has its debut album, “Rock’s Roll Gangster,” out. He has a passion for fashion in addition to music and has launched his own clothing line.

On November 2, 1969, Reginald “Fieldy” Arvizu was born in Los Angeles County, California. He has had three marriages and five children between his last two unions. His two daughters, Sarina Rae and Olivia Ann Marie Arvizu were born on September 30, 1997, and December 9, 1998, respectively. He wed Shela Colton, his second wife, in 1988. Later, the couple got divorced.

The American musician Reginald Arvizu has a $20 million fortune. Reginald Arvizu, who was born in 1969 in Los Angeles County, California, joined the band L.A.P.D. as soon as he graduated from high school. After agreeing to an arrangement with singer Jonathan Davis, the group ultimately changed its name to Korn.