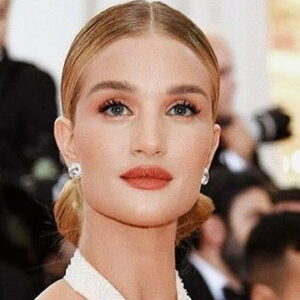 Rosie Huntington-Whiteley is an actress, model, and businesswoman from the United Kingdom. Her work for ‘Victoria’s Secret,’ a well-known American designer, manufacturer, and marketer of women’s lingerie, apparel, and cosmetic items, is well-known. She’s also recognized for her work with ‘Burberry,’ a British luxury fashion firm, where she was the face of the ‘Burberry Body’ brand scent. She went on to act in the American sci-fi action blockbuster ‘Transformers: Dark of the Moon,’ the third episode in the popular Transformers film franchise. Commercially, the picture was a big hit, grossing more than $1 billion. It was also nominated for a number of Academy Awards. She made her acting debut in the action picture ‘Mad Max: Fury Road’ a few years later. The film was a commercial success, allowing her to make a successful move from modeling to acting. She has garnered numerous awards throughout her career, including the ‘Elle Style Award’ for ‘Model of the Year’ in 2009, as well as the Harper Bazaar Women of the Year Award for ‘Model of the Year’ and ‘Businesswoman of the Year’ in 2014 and 2016, respectively. ‘Forbes’ magazine just ranked her one of the world’s highest-paid models.

Rosie Huntington-Whiteley was born on April 18, 1987, in Plymouth, Devon, England. Her mother, Fiona, was a personal trainer, and her father, Charles, was a chartered surveyor. She is the middle kid in a family of three.
She acquired a deep interest in fashion as a child, poring over the pages of magazines such as ‘Vogue.’ Tavistock College was her place of study.

She began her modeling career at the age of 16 and began starring in advertisements. She was also featured in ‘Teen Vogue,’ which provided a much-needed boost to her career.

Career as a model

In early 2006, Rosie Huntington-Whiteley was signed to the American lingerie brand ‘Victoria’s Secret.’ She made her runway debut at the brand’s Los Angeles fashion show. She remained mainly unknown for the following two years, until she was cast in Burberry’s autumn/winter campaign by chief creative director Christopher Bailey. In November 2008, she was featured on the cover of the ‘British Vogue’ magazine alongside two other models, as her fame grew.

Her celebrity soared when she participated in numerous more advertising campaigns, and fashion photographer John Rankin Waddell created a book solely dedicated to her.
In March 2011, she had a solo appearance on the cover of ‘British Vogue,’ and in July, she appeared on the covers of ‘Elle’ and ‘GQ’ magazines’ UK issues. Later that year, she was named the face of Modelco, an Australian cosmetics company.

In 2009, Rosie Huntington-Whiteley made her acting debut in a short film in which she portrayed a woman whose partner forgets Valentine’s Day.

In 2011, she made her feature film debut in the sci-fi action picture ‘Transformers: Dark of the Moon,’ in which she played one of the main characters. The film was the third episode in the ‘Transformers’ film series, and it was based on characters from the iconic ‘Transformers’ toy line. In addition to Rosie Huntington-Whiteley, the picture starred Shia LaBeouf, Josh Duhamel, John Turturro, Tyrese Gibson, Patrick Dempsey, and Kevin Dunn.

The picture, which was made on a shoestring budget of less than $200 million, was a major commercial success, grossing more than $1 billion worldwide. It is presently the sixteenth highest-grossing film of all time, having formerly ranked fourth. It was nominated for an Academy Award in three categories. Despite the popularity of the film, Huntington-acting Whiteley’s abilities were criticized. She was also a Razzie Award nominee for Worst Supporting Actress.

She then starred in George Miller’s 2015 action thriller ‘Mad Max: Fury Road,’ which he co-wrote, directed, and produced. Following the films ‘Mad Max’ (1979), ‘Mad Max 2’ (1981), and ‘Mad Max Beyond Thunderdome,’ this was the fourth installment of the Mad Max franchise (1985). The picture was well-received by critics. The plot centred around the exploits of a police officer in a dystopian future Australia where societal collapse has resulted in a scarcity of water and petrol owing to wars.

‘Mad Max: Fury Road’ actress Rosie Huntington-Whiteley is best recognized for her part in the film. The film was widely hailed by critics, with many hailing it as one of the best action pictures ever created. It received 10 Academy Award nominations and won six of them. The picture was also financially successful, grossing approximately $380 million on a $150 million budget. For her performance, Huntington-Whiteley was nominated for a ‘Gold Derby Award,’ along with the rest of the ensemble.

Rosie Huntington-Whiteley is dating Jason Statham, who is an actor. In 2016, they announced their engagement. She gave birth to a boy named Jack Oscar Statham in June 2017.

Rosie Huntington-Whiteley has a net worth of $30 million.