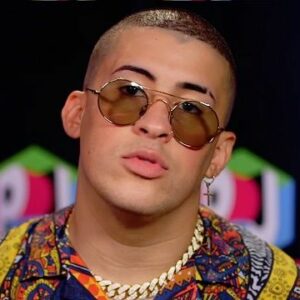 Bad Bunny is a well-known Puerto Rican reggaeton and trap performer. He is widely regarded as the best trap artist of his time. Despite the fact that his tracks are mostly in Latin or Spanish, world-famous performers such as Enrique Iglesias have included Bad Bunny in their songs. Bad Bunny is also recognized with popularizing Latin trap among music fans worldwide. When his song ‘Diles’ got the attention of DJ Luian of ‘Hear This Music,’ he rose to notoriety as a trap vocalist. Bad Bunny began collaborating with other renowned musicians after the release of ‘Hear This Music,’ and he quickly established himself as a well-known artist. Many of his songs have charted on the ‘Hot Latin Songs’ chart, including ‘Sensualidad,’ ‘Soy Peor,’ and ‘T No Metes Cabra.’ On social media, Bad Bunny is also well-known. His official YouTube channel has more than nine million subscribers, and he has more than ten million followers on Twitter.

Benito Antonio Martnez Ocasio, better known as Bad Bunny, was born on March 10, 1994, in San Juan, Puerto Rico. Benito Martnez and Lysaurie Ocasio Declet, Bad Bunny’s parents, raised him. His father, Martnez, is a truck driver, while his mother, Lysaurie, is a schoolteacher. With his two younger brothers, Bad Bunny spent his boyhood in Vega Baja.
He began singing at an early age after hearing an album by Vico C, a well-known reggaeton rapper. Bad Bunny had determined to be a singer by the time he was five years old. He began writing songs at the age of 13 and even produced some of his own.
Bad Bunny studied audiovisual communication at ‘The University of Puerto Rico at Arecibo.’ He dropped out of university, though, to concentrate completely on his musical career. He began working as a bagger at a nearby supermarket to help pay for his expenses. At the same time, he was concentrating on music production.

Bad Bunny had written a song named ‘Diles,’ which he had submitted to SoundCloud, an online audio distribution platform. Many people heard the tune, including DJ Luian, a music producer. Luian was intrigued with Bad Bunny’s vocal abilities and decided to sign him. Bad Bunny became a regular artist for the ‘Hear this Music’ record label and began collaborating with well-known musicians.
He collaborated with Colombian musician J Balvin in 2017 and was featured in Balvin’s smash song “Si Tu Novio Te Deja Sola.” Becky G’s single, named ‘Mayores,’ included Bad Bunny as well. Bad Bunny went on to secure a booking arrangement with ‘Cardenas Marketing Network’ the following year (CMN).
After that, he worked with J Balvin and Prince Royce on a song called ‘Sensualidad,’ which reached number ten on the ‘Hot Latin Songs’ chart. In November 2017, Bad Bunny released his single ‘T No Metes Cabra,’ which charted at number 38 on the ‘Hot Latin Songs’ list.
Bad Bunny’s success grew as a result of his collaborations with well-known artists. He soon rose to prominence as one of the most in-demand trap artists, attracting international attention. With over four billion views on YouTube, Bad Bunny became an online superstar. He also has a sizable fan base on his official Instagram account. Every month, 5.7 million people listen to Bad Bunny on Spotify.

Many of Bad Bunny’s songs have not only charted, but have also been nominated for prominent award shows. His song ‘Si Tu Novio Te Deja Sola’ was nominated for ‘Best Urban Song’ and ‘Best Urban Performance’ at the ‘Latin Grammy Awards.’ In 2017, one of his pieces was nominated for a ‘Premios Juventud’ award.
Many prominent performers have cooperated with Bad Bunny, making him one of the go-to artists. Nicki Minaj, Arcángel, Enrique Iglesias, Daddy Yankee, and Nicky Jam are just a few of the artists with whom Bad Bunny has collaborated.

In January 2018, Bad Bunny launched a campaign to save a young boy’s life. Bad Bunny utilized his celebrity to raise money for the young child who needed a heart transplant. In an effort to save the boy, Bad Bunny also contributed $100,000.
Wrestling is Bad Bunny’s favorite sport. He has a lot of wrestling-related photos and videos on his Instagram profile. He’s shared a slew of photos with WWE superstars such as Ronda Rousey and Goldberg. Ric Flair, the legendary WWE wrestler, has appeared in one of his music videos.

Bad Bunny has a net worth of $18 million.