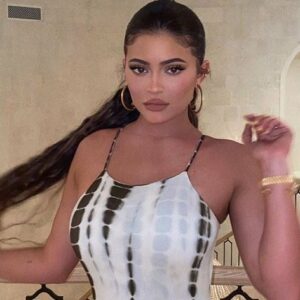 Kylie Jenner is a well-known American model, reality television celebrity, and fashion designer. She and her family became well-known as a result of the E! network reality TV show ‘Keeping Up with the Kardashians,’ which focused on her older step-sister Kim Kardashian’s high-profile affairs. Following their on-screen success, Kylie and her elder sister, Kendall Jenner, quickly became adolescent icons. They began endorsing a variety of designer labels before launching their own collection, ‘Kendall & Kylie.’ They even dabbled in writing with ‘Rebels: City of Indra,’ a ghostwritten teen sci-fi novel. Kylie started modeling when she was a teenager and has been in a lot of advertisements as well as music videos for well-known musicians. Kylie Lip Kit is her own lipstick line, and Kylie Hair Kouture is her hair extension product. Kylie is well-known for her involvement in a number of humanitarian causes. She recently surpassed the top ten celebs on Instagram in terms of followers. She also landed her own spin-off reality TV program, ‘Life of Kylie,’ which will air on E! in the near future.

Bruce (now known as Caitlyn Jenner following a gender transition surgery) and Kris Jenner gave birth to Kylie Kristen Jenner on August 10, 1997, in Los Angeles, California. Both of her parents are television personalities, and her father is a retired Olympic gold medalist decathlete.

She is the youngest kid in her parents’ large family, which includes her step-siblings. She has three elder half brothers – Burt, Brandon, and Brody Jenner – and an older half-sister, Casey, on her father’s side. From her mother’s side of the family, she has three older half-sisters, Kourtney, Kim, and Khloé Kardashian, as well as one elder half-brother, Rob. Kendall Jenner, her older sister, shares both of her parents.

She went to Sierra Canyon School for a while before deciding to homeschool in 2012. In July 2015, she graduated from Laurel Springs School in Ojai, California with a high school diploma.

Kylie Jenner began her acting career in 2007 as a prominent cast member of the Kardashian family’s iconic reality television show ‘Keeping Up with the Kardashians.’ She’s also participated in a number of spin-off shows centered on her sisters, Kourtney and Khloé Kardashian.

In August 2010, she began her modeling career by appearing in the Sears “Crush Dream” commercial. She also expressed an interest in pursuing an acting career after she completed her education.
On August 6, 2011, Kylie and her older sister Kendall co-hosted ‘Glee: The 3D Concert Movie’ at the Regency Village Theater in Westwood, California. They interviewed the cast of ‘The Hunger Games’ at the Los Angeles premiere on March 12, 2012.

Following Kendall, she received a large quantity of money in 2011 by sponsoring two Nicole by OPI nail lacquers, “Rainbow in the S-kylie” and “Wear Something Spar-kylie.” In February 2013, Kylie and Kendall debuted ‘The Kendall & Kylie Collection’ with PacSun.

In June 2013, the sisters released the ‘Metal Haven by Kendall & Kylie’ jewelry collection in collaboration with Pascal Mouawad’s Glamhouse. They debuted a shoe and handbag line for Steve Madden’s Madden Girl label in February 2014.

Kylie Jenner starred in The Boy Band Project’s music video for “Find That Girl” in 2013. In the years after, she has been in a number of music videos, including PartyNextDoor’s ‘Recognize’ and ‘Come and See Me,’ Jaden Smith’s ‘Blue Ocean,’ and Tyga‘s ‘Stimulated’ and ‘Dope’d Up.’

Kylie and her sister Kendall co-wrote the science fiction novel ‘Rebels: City of Indra’ in 2014. Reviewers slammed the book for being ghostwritten by Maya Sloan.

She made her acting debut in a trailer for the 2014 ‘Much Music Video Awards,’ which she also co-hosted with her sister Kendall, on June 15, 2014. On May 17, 2015, they also introduced Kanye West‘s closing performance at the Billboard Music Awards.

Kylie debuted her hair extension collection, ‘Kylie Hair Kouture,’ in 2015 with Bellami Hair. In March 2015, she became the second ever ambassador for the skin care product ‘Nip + Fab.’ In the fall of 2016, she was named the face of PUMA. In June 2015, she paired up with her sister Kendall to create their clothing line ‘Kendall + Kylie’ with Topshop, a British fashion company. In September 2015, she established her own website and a paid lifestyle app, as well as her ‘Kylie Lip Kit’ lipstick range.

Despite earning bad critical reviews, the E! network series ‘Keeping Up with the Kardashians,’ in which Kylie Jenner has participated for 13 seasons, has attracted a large audience. It went on to become the network’s most popular show, spawning a slew of spin-offs starring various members of the Kardashian-Jenner family.

Over the years, Kylie Jenner has volunteered for a variety of charities. She and her sisters auctioned her old garments on eBay in 2013 to generate money for the Children’s Hospital of Los Angeles. On November 10, 2013, the family also staged a charity yard sale.

She took part in a charity bowling game at PINZ bowling alley in Studio City, California, on January 19, 2014, to raise money for The Robin Hood Foundation. She and Kendall attended singer Chris Brown‘s two ‘Kick’n It For Charity Celebrity Kickball’ tournaments in Glendale, California in July and August 2014.

For their reality TV show ‘Keeping Up with the Kardashians,’ Kylie Jenner and her family shared the ‘Choice TV Reality Star: Female’ award at the 2013 ‘Teen Choice Awards.’ In the years that followed, she was nominated for a number of ‘Teen Choice Award’ nominations.

She and her sister, Kendall, were named on ‘Time’ magazine’s ‘Most Influential Teens’ list in 2014 and 2015. They were previously named Style Stars of the Year by ‘Seventeen’ magazine in 2011.

‘usmagazine.com’ stated in November 2011 that Kylie Jenner, then 14 years old, was dating Australian pop artist Cody Simpson, who was 7 months her senior. They first met during the premiere of ‘Breaking Dawn: Part 1’ in Hollywood.

In September 2014, she began dating rapper Tyga, after which she appeared in some of his music videos. They had a rocky start in November 2015, but quickly reconciled; however, they eventually split up in March 2017. In August 2015, the couple made headlines when he surprised her with a $260,000 white Ferrari 458 convertible on her 18th birthday. On her next birthday, he surprised her with a Mercedes-Benz Maybach.

After appearing in one of his music videos in 2016, she was linked to rapper PartyNextDoor. She was photographed with rapper Ty Dolla Sign at the Nylon & BCBGeneration Young Hollywood Party the same year.

Kylie’s net worth is projected to be $1 billion, making her one of the youngest billionaires in the world. However, Forbes reported in May 2020 that she is no longer a billionaire after she sold her 51 percent stake in Kylie Cosmetics to cosmetics giant Coty.

In an episode of their family program in 2015, Kylie Jenner, who had previously denied undergoing a lip augmentation, revealed to using “temporary lip fillers,” putting public speculation to rest. However, it caused a social media frenzy when many of her young fans began replicating her appearance in what they dubbed the Kylie Jenner Challenge, which frequently resulted in comical results.

She bought a $2.7 million five-bedroom property in Calabasas, California, soon before her 18th birthday in 2015. She moved in once she reached 18 years old.