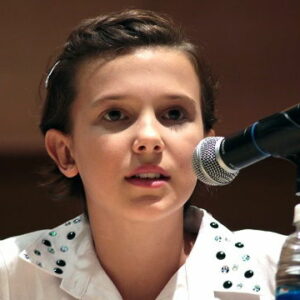 Millie Bobby Brown, then eight years old, had recently moved to Orlando, Florida, with her family in 2012 and enrolled in an acting course to fill her weekends. She stood out right away, and a famous Hollywood talent scout took note. He told Millie’s parents, “She has instincts you can’t teach,” and advised them to support her acting abilities. Millie began meeting with Hollywood’s leading children’s talent agencies when her parents packed up the family and went to Los Angeles. She earned the role of Madison O’Donnell in BBC America’s show, ‘Intruders,’ in November 2013 after a home-shot audition film. The producers didn’t even require a face-to-face meeting, as is customary! With her calm yet passionate portrayal as Eleven in Netflix’s sci-fi drama series ‘Stranger Things,’ the uber-talented kid actor has outshone even veteran actors. Millie was praised by ‘Variety Magazine’ for having “the kind of presence that some performers take a lifetime to earn.” ‘She’s going to be cast in a lot of things.’ She is proven to be a big source of inspiration for youngsters and adults alike, from stylish fashion statements to music videos. She has almost 2 million Instagram followers and 423K Twitter followers.

In 2013, Millie made her television debut as Alice in the ABC fantasy drama ‘Once Upon a Time in Wonderland.’ Following that, she was cast as Madison O’Donnell in the BBC America paranormal drama-thriller series “Intruders.” She has had minor roles in prominent sitcoms such as ‘NCIS,’ ‘Modern Family,’ and ‘Grey’s Anatomy,’ among others.

After starring in the Netflix sci-fi movie ‘Stranger Things,’ she became an instant celebrity. Her performance as ‘Eleven’ (011) was universally praised. Eleven is a young girl who has developed psychokinetic abilities as a result of a government-sponsored experiment. The narrative begins when she inexplicably comes in the tranquil little town of Hawkins, Indiana. Matt and Ross Duffer, the show’s creators, were apparently having trouble casting the character.

“With very little dialogue, she has to express a lot of feeling.” Even the best child actors have trouble listening practically all of the time. They can deliver their lines well, but staying totally in character in a situation when they aren’t speaking requires an other set of skills.” When Millie walked in, their prayers were fulfilled! The series has a 95% approval rating on Rotten Tomatoes, and Steven Spielberg has called it his favorite television show. Her ‘Stranger Things’ persona has sparked a lot of fan art, including tattoos. This Halloween, fans dressed up as ‘Eleven’ in the iconic pale pink sack outfit. Millie Bobby Brown (@milliebobby brown) shared this video on December 12, 2016 at 6:03 a.m. PST.

My other kids preferred cartoons, but Millie preferred musicals such as “Chicago,” “Moulin Rouge,” “Annie,” and “Bugsy Malone.” Millie’s father, Robert Brown, adds, “She was acting from the beginning.” With an endearing British accent, the 12-year-old comes across as precocious, but her wide, gorgeous eyes tell of her innocence. After mastering the complicated character of ‘Eleven’ with such elan, there is no doubt about her potential. She comes across as a compassionate person, just like her onscreen avatar, which she claims is the one thing she has in common with Eleven. This young actress, who has a deceptively old soul, is being dubbed the latest “It” girl for all the right reasons.

‘Interview Magazine’ and ‘So It Goes’ have both featured her on their covers. Despite admitting that she “hates shopping,” she is quickly establishing herself as a prominent fashionista. She looked stunning in the exquisite Red Valentino embroidered tulle gown she wore to the Emmys. She shaved off her long stresses for the sake of her character in “Stranger Things” like a boss!! At Jimmy Fallon’s ‘The Tonight Show,’ she completely kills Nikki Minaj’s ‘Monster’ verse! Her performance of ‘Uptown Funk’ at the ‘Emmy Awards’ made us question if the adorable actor may pursue a career in music. Her Eleven avatar strolls through neon-lit city streets, lip-syncing to ‘Find Me,’ a brand new hit by British singer Birdy and DJ duo Sigma. Millie Bobby Brown (@milliebobby brown) posted this video on December 14, 2016 at 3:49 p.m. PST.

The down-to-earth performer says that she never expected to achieve such celebrity. “Millie Bobby Brown says, “It’s a pinch-me moment.” She has a strong bond with her family and enjoys nothing more than a Sunday roast meal with a movie. Her Twitter account is managed by her older brother, while her Instagram account is managed by her older sister. She acknowledges that she could probably do without her phone. She traveled around a lot as a kid. She was born in Marbella, Spain, and has subsequently resided in Bournemouth, England, Orlando, Florida, and Vancouver, British Columbia (Canada). She regularly engages in Thai boxing and enjoys singing. Burberry, Stella McCartney, and Coach are among her favorite fashion labels. Winona Ryder, her co-star, has a special bond with her. Millie Bobby Brown (@milliebobby brown) shared this video on December 21, 2016 at 6:40 a.m. PST.

The allure of celebrity leads us to imagine that their lives are perfect, but the truth is that they are just as human as the rest of us in their challenges. Millie’s family relocated from Orlando, Florida to Los Angeles to assist her acting career. Millie won minor roles in TV shows, but despite being on the shortlist, she continued missing out on major roles. Money grew scarce, and the family was forced to borrow to keep their daughter’s dream alive. When the money ran gone, the family accepted defeat and returned to the United Kingdom. ‘I was heartbroken. I couldn’t find work.

Millie says, “I believed I was done.” She landed the ‘Stranger Things’ audition after repeated rejections from casting agents for appearing too mature and grownup. ‘During the audition, I had to cry.’ ‘I hit it out of the park because my emotions were so raw.’ recalls the young actress. Her career was altered by the show, and she and her family returned to the United States. Millie Bobby Brown (@milliebobby brown) posted this video on December 21, 2016 at 1:07pm PST. Millie is a huge football lover who supports Liverpool FC.

Millie Bobby Brow has a net worth of $10 million.