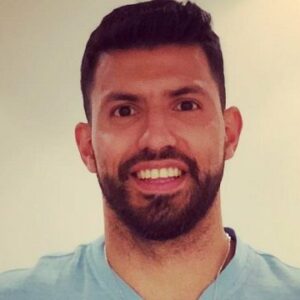 Sergio Agüerois is an Argentine footballer who currently plays for the Argentine national team and Manchester City in the Premier League. Since his boyhood in Buenos Aires, he has been a football aficionado. He was the youngest Argentine footballer to compete in the prestigious ‘Argentine Primera División’ at the age of 15. The ‘La Liga’ club ‘Atlético Madrid’ acquired him in 2006 after being impressed by his outstanding performance. In his 234 games with ‘Atlético,’ he has scored 101 goals. In 2010, he also played a key role for his team in the UEFA Europa League and the UEFA Super Cup. In 2011, he was given a contract by ‘Manchester City,’ which he eagerly accepted. He quickly smashed numerous records and became the league’s leading goal scorer among non-European players. He also became ‘Manchester City’s’ all-time leading goal scorer in November 2017. Sergio has played in two FIFA World Cups and one Copa América for his country.

Sergio Agüero was born on June 2, 1988, in Buenos Aires, Argentina. He was his parents’ second-born child. Leonel, his father, was a cab driver, and Adriana, his mother, was a housewife. Sergio grew up in a large family with six siblings.

When he was born, his parents were both teenagers and financially disadvantaged. When his mother was pregnant with him, this caused a lot of problems. After he was born, things did not improve much, and the family struggled to make ends meet. Sergio’s family relocated to Florencio Varela when he was two years old.

Sergio’s father used to play football but was never interested in making a profession out of it. His love for the game, on the other hand, remained undiminished and influenced Sergio. Leonel soon took responsibility of his son’s training because he couldn’t afford to enroll him in a football academy due to financial constraints.
Fortunately, Argentina’s football infrastructure was robust, as was the ‘Independiente,’ a youth system that encouraged fresh talent in the sport. Sergio began his career in the club’s junior level before making his senior debut against ‘Club Atlético’ in 2003.

He was the youngest player to make his division debut on the pitch at the age of just over 15 years. Football great Diego Maradona previously held the record. Sergio became the youngest Argentine to play in the Copa Libertadores when he did so in 2004. His performance earned him a position in the national ‘Under-20’ team, which competed in the 2005 ‘FIFA Under-20 World Cup,’ which Argentina finally won.

Sergio’s performance improved during the 2005–2006 season, as he ended up scoring 18 goals in 36 league outings. Sergio confirmed reports that he was being pursued by a number of European clubs. He soon revealed that this would be his final season with the local Argentine team. In the hunt to sign Sergio, ‘Atlético Madrid’ appeared to be the frontrunner, and the deal was completed in May.

Sergio was officially acquired by ‘Atlético Madrid’ in May 2006. Sergio, on the other hand, sparked controversy in October 2006 when he scored a goal with his hand. Sergio’s first season with ‘Atlético Madrid’ was a mixed bag, as he only managed to score seven goals in all of his appearances.

He became a star of the team during the 2007–2009 season of ‘La Liga,’ scoring 19 goals and becoming the league’s third-highest goal-scorer. He was selected ‘Man of the Match’ in a match against Barcelona in March 2008. His performances against more powerful opponents enabled ‘Atlético Madrid’ finish fourth in the final standings. This meant they had qualified for the first time in ten years for the ‘UEFA Champions League.’

Sergio had another successful season in 2008–2009, as he finished the season as one of the top ten contenders for the ‘Pichichi Trophy.’ He also assisted in his team’s qualification for another another ‘Champions League.’ The next season, he assisted his team in reaching the ‘UEFA Europa League’ and ‘Copa del Rey’ finals.

In 2010, ‘Atlético Madrid’ defeated the favorites, ‘Internazionale,’ to win the ‘UEFA Super Cup.’ Sergio’s contract with the club was extended for another four years, and Sergio was named vice-captain of the team, honoring him for his crucial role in the club’s incredible performances in numerous tournaments.

The 2010–2011 season was a huge success for ‘Atlético Madrid,’ as Sergio was at his best form of his career. He scored 20 goals in the league, and he scored back-to-back goals in seven straight games between March and May 2011. Sergio scored his first hat-trick in a match against ‘Mallorca’ in May 2011.

Despite his happy tenure with ‘Atlético Madrid,’ Sergio aspired to greater heights, and in mid-2011, he openly announced his desire to leave the club. The club’s supporters were not pleased with his decision, and he was booed during his final match with the team. Sergio was bought from ‘Atlético Madrid’ in July 2011 by the ‘Premier League’ club ‘Manchester City.’

In a ‘Premier League’ encounter against ‘Swansea City,’ he made his debut for ‘Manchester.’ His team was victorious in the contest. Despite the fact that his debut season was marred by injuries, he continued to make appearances on the field. Sergio made his ‘League Cup’ debut against ‘Arsenal’ and scored the game’s only goal. He helped his team reach the top 16 of the UEFA Europa League in 2011–2012. He was named ‘Manchester City Player of the Year’ in May 2012.

Following another excellent 2012–2013 season, it was claimed that ‘Real Madrid’ had been scouting Sergio for quite some time. For the first time in November 2013, ‘Manchester City’ advanced to the ‘Champions League’ knockout stage. Sergio was instrumental in his team’s 2014 ‘Football League Cup’ victory.

Sergio had another successful season in the 2015–16 ‘Premier League,’ scoring 24 goals and having the greatest minute-to-goal ratio. In January 2018, he was named ‘Player of the Month.’

Sergio has played in numerous international games for Argentina’s youth teams. He has played for his country in the ‘FIFA World Cup’ in 2010 and the ‘Copa América’ in 2011. In addition, he was a key member of Argentina’s squad for the 2014 ‘FIFA World Cup.’ Unfortunately, his squad lost in the ‘World Cup’ finals. He also played for Argentina in the 2015 Copa America, when they lost in the finals for the second time.

Sergio Agüero married Gianinna Maradona, the daughter of Diego Maradona, the famed Argentine footballer, in 2008. In 2009, the couple welcomed their first child. The marriage, however, was short-lived, and the pair divorced in 2013. He is said to be dating Argentine singer Karina Tejeda at the moment.

Sergio Aguero has a net worth of $80 million dollars.