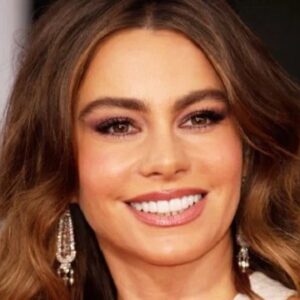 Sofia Margarita Vergara is a Colombian-American actress and model who began her career on Univisión as a co-host of a couple of Spanish-language television programmes. Sofia proved that hard effort and dedication pay off in the end, despite overcoming many obstacles on her way to success. She is most known for her role as Gloria Delgado-Pritchett on ABC’s ‘Modern Family,’ for which she received multiple award nominations. ‘Chasing Papi,’ ‘Four Brothers,’ ‘Meet the Browns,’ ‘Madea Goes to Jail,’ ‘The Smurfs,’ ‘Happy Feet Two,’ ‘The Three Stooges,’ ‘Machete Kills,’ and ‘Hot Pursuit,’ among others. She has been the highest-paid actress on US television for three years and is placed 32nd on Forbes’ list of the world’s most powerful women. She has modeled for a variety of companies and goods, as well as her own clothes and jewelry lines. She is married to Joe Manganiello and has a son from her former marriage, Manolo, whom she lives with in Los Angeles, California. She is a cancer survivor who founded a nonprofit to assist Colombian families dealing with cancer.

Sofia Vergara was born on July 10, 1972, in Barranquilla, Colombia, to a Roman Catholic family. Margarita Vergara de Vergara, her mother, was a homemaker, and Julio Enrique Vergara Robayo, her father, was a cattle farmer.
She hails from a large family, with five siblings and a large number of cousins. Sandra Vergara, her younger sister, is also an actress.
Marymount International School Barranquilla is a private bilingual Spanish/English school in Barranquilla. She went on to study dentistry at a university in Colombia for three years, but left out after the last two semesters to pursue a modeling career.
Sofia’s older brother was shot and killed in a botched kidnapping attempt in 1998. After fleeing Colombia’s instability, the family relocated to Miami, Florida.

Sofia Vergara began her modeling career after a photographer spotted her walking on a beach in Colombia and immediately offered her work. Coming from a conservative Catholic family, she was first hesitant to accept the offer and sought permission to work as a model from her teachers.

She made her debut in a Pepsi commercial targeting for a Latin American audience when she was 17 years old. She began working as a runway model in Bogota, Columbia, when she was 20 years old.
Her first major television role was as a co-host on the Univisión travel show “Fuera de serie.” She traveled to various destinations throughout the world for the show from 1995 to 1998. She gained recognition in the United States as a result of the show, which was also carried on American network stations.

She made her acting debut in the comedy film ‘Big Trouble’ in 2002. Her first important part as an actor, however, came the following year in the film ‘Chasing Papi.’
She was cast in the film ‘Four Brothers’ in 2005. She went on to star in two Tyler Perry films, ‘Meet the Browns’ (2008) and ‘Madea Goes to Jail,’ respectively (2009). For her role in ‘Madea Goes to Jail,’ she was nominated for an ALMA Award for ‘Best Actress in Film.’

She appeared as a guest on a number of TV shows during this time, including ‘Baywatch’ and ‘Entourage.’ She was also cast in two television series, ‘Hot Properties’ (2005) and ‘The Knights of Prosperity,’ both of which she starred in (2007). She starred as Mama Morton in the Broadway version of ‘Chicago’ for five weeks in 2009. In the same year, she landed her breakout role on the ABC sitcom ‘Modern Family’ as the sultry and powerful Gloria Delgado-Pritchett. The show was an instant sensation, and she received numerous prizes and nominations for it.
She starred in a number of Hollywood films in 2011, including ‘The Smurfs,’ ‘New Year’s Eve,’ and ‘Happy Feet Two.’ She worked as a voice actor in the last one.

She appeared in ‘The Three Stooges,’ a film recreation of the 1930s vaudeville performance, in 2012. In the film, she played a harsh and terrible character. She voiced Gabby Babblebrook in the animated sci-fi film ‘Escape from Planet Earth,’ released in 2013. She appeared in the film ‘Machete Kills’ the same year.
In 2015, she appeared in the film ‘Hot Pursuit’ as both an actor and an executive producer. She was nominated for a People’s Choice Award for her performance in the film. ‘The Female Brain,’ her most recent project, is currently in post-production.

‘Modern Family’ has been one of Sofia Vergara’s most well-known roles over the years. The show has been on the air for eight seasons and has been a critical and commercial success.

For her role as Gloria Delgado-Pritchett in the ABC series ‘Modern Family,’ Sofia Vergara has been nominated for four Golden Globe Awards, four Primetime Emmy Awards, and seven Screen Actors Guild Awards. From 2010 to 2013, she received seven awards for the role.
She was the best paid actress on television in the United States in 2012, 2013, and 2016, according to ‘Forbes.’ According to the report, she made $43 million in 2016 from January to September. She was also named to ‘Forbes’ list of the world’s most powerful women.
She was named the “most desirable” woman of 2012 by Askmen.com. She was rated 12th on the same list the following year.

Sofia Vergara married Joe Gonzalez, her high school lover, in 1990 when she was 18 years old. She gave birth to her son Manolo two years later, in 1992. The following year, though, she divorced her husband. As a single working mother, she raised her kid. She was diagnosed with thyroid cancer in 2000 and had to have her thyroid gland removed during surgery. She recovered completely thanks to radioiodine therapy, although she still needs to take medication to avoid hypothyroidism.
Julio, her younger brother, was deported to Colombia from the United States on May 9, 2011. He had a long-term drug problem.

She began dating Nick Loeb in 2010 and is said to have gotten engaged in July 2012. They divorced in May 2014, and Sofia was involved in a legal struggle with Loeb a year later over the fate of two embryos created through in vitro fertilization while they were together. Loeb attempted to accuse her of neglecting the embryos by implying that she intended to destroy them. Her lawyer, on the other hand, verified that she was happy to have them “frozen permanently.”

She began dating Joe Manganiello, the star of ‘True Blood,’ in July 2014 and they were engaged six months later. On November 21, 2015, they married in Palm Beach, Florida.

Sofia Vergara, who has naturally blonde hair, previously admitted that her appearance caused confusion during auditions because most people assumed that all Latinos looked like Salma Hayek. Her hair was frequently dyed brown to make her look more like stereotypical Hispanic characters.

Sofia Vergara has a net worth of $180 million.