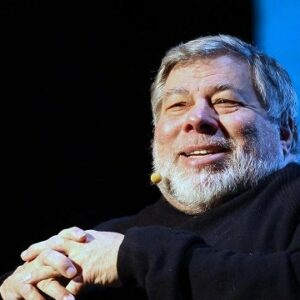 Steve Wozniak, a computer wizard, is credited with accelerating the microcomputer revolution by inventing the Apple I and Apple II computers. Steve Wozniak was born in a bustling technology center and showed signs of making it big in the area of electronics since he was a child. He despised traditional education and preferred to build his own technologies from the ground up. He teamed up with yet another electronic geek master of his day, Steve Jobs, not long after his hobby transformed into a full-time career. The pair rewrote history in the nascent realm of personal computers by working together. They co-founded Apple Computers, which has grown to be one of the world’s most cherished and highly regarded businesses. Jobs filled the marketing area while Steve Wozniak took care of the company’s engineering. In the late 1970s, Wozniak created both the Apple I and Apple II computers on his own. He holds four patents and is responsible for a number of other technological breakthroughs, such as the first programmable universal remote control, wireless GPS technology, and so on. Wozniak is a legend in his own right, having received countless accolades and decorations for his remarkable and extraordinary contributions to science and technology.

Stephen Gary Wozniak was born to Margaret Elaine (Kern) and Jacob Francis “Jerry” Wozniak in San Jose, California. His ancestors are of Polish, German, Irish, and English descent.
Growing up in a thriving technological center benefited this technically-inclined boy who has found his true passion in electronics since he was a child. He used to make homemade equipment including voltmeters, ham radios, calculators, and games when he was a kid.

In 1971, he met Steve Jobs through a mutual acquaintance, who, like him, despised education and shared a passion and enthusiasm for electronics. He and Jobs had a strong bond since they were both driven by the same enthusiasm.
While working on a mainframe computer at Hewlett-Packard, the two became friends (HP). Wozniak dropped out of the University of California about this time.

Meanwhile, the world of electronics experienced a boom as demand for personal computers began to rise. It was largely owing to the advancement of the microprocessor.
He decided to construct his own computer because he couldn’t buy one. After it came the Apple I, which was the first generation of Apple computers. He was the only designer of the hardware, circuit board designs, and operating system.

In terms of performance, Wozniak’s computer outperformed the Altair that was on the market at the time. In computing history, the Apple I was the first home computer to display a character on a television screen.
He and Jobs brought the Apple I computer to the Palo Alto-based Homebrew Computer Club, a group of electronics hobbyists who were interested in computing.

Jobs was in charge of marketing the device, while Wozniak was working on ways to improve and expand it. The fact that the Apple I computer had an easy-to-achieve video capability that others lacked set it apart from the competition.

They began selling fully built printed circuit boards after selling some of their personal belongings. They were marketing and selling monitors, electronic devices, and computer games in no time. They were able to raise $1,300 as a result of this.

He and Jobs co-founded Apple Computers on April 1, 1976. Meanwhile, he left from his position at Hewlett Packard and joined Apple as a Vice President. He oversaw the research and development department.

The Apple II computer went on to become one of the first mass-produced personal computers to be a huge success.
With the passage of time, Apple’s popularity began to climb to new heights. Its expansion, as well as the addition of more engineers, was unavoidable. The company went public in 1980, with a stock market valuation of US $ 117 million.

He almost avoided death in 1981 when he was involved in an unlucky accident while piloting a plane on a runway that crashed. It took him two years to get back on his feet after the incident. He funded two US Festivals to celebrate evolving technologies during this time.

When he returned to Apple, he resumed his duties as an engineer and a motivator for the company’s employees. The corporation had grown significantly, and its stock worth had risen to US$ 985 million.
His full-time employment with Apple came to an end on February 6, 1987, when he retired. Nonetheless, he is still employed by Apple and earns a stipend of approximately USD$120,000 per year. He is also a shareholder in Apple.
Following his departure from Apple, he started a new company named CL 9. The business was the first to provide a programmable universal remote control to the market.

He had always desired to work as a teacher at an elementary school because of the vital role that teachers play in the lives of students. After leaving Apple, he pursued his dream of teaching computer science to students in grades five through nine.

He founded WOZ (Wheels of Zeus) in 2001 to create wireless GPS to assist people discover ordinary items quickly and conveniently.
He became a member of the Ripcord Networks Inc and Danger Inc boards of directors in 2002.
In the year 2006, WOZ ceased operations. Following that, he formed Acquicor Technology alongside Ellen Hancock and Gil Amelio as a holding company for acquiring and developing technology companies.
He went from being an engineer to becoming a novelist, with his first book, ‘iWoz: From Computer Geek to Cult Icon: How I Invented the Personal Computer, Co-Founded Apple, and Had Fun Doing It,’ being his first publication. Gina Smith, a writer, contributed to the book as a co-author.

He worked as the chief scientist at Fusion-io, a data storage and server firm in Salt Lake City, Utah, in 2009. Two years later, he was a member of the company’s management team that rang The Opening Bell on the first day of trading on the NYSE. Until 2014, he was employed by Fusion-io.
He joined Primary Data as chief scientist in 2014. Lance Smith, David Flynn, and Rick White are all former Fusion-io executives that created Primary Data.

He was the single creator of the Apple I and Apple II computers and was a co-founder of Apple Computers Inc. He was the sole inventor of four patents, including ‘Microcomputer for use with video display,’ ‘Controller for magnetic disc, recorder, or the like,’ ‘Apparatus for digitally controlling PAL color display,’ and ‘Digitally-controlled color signal production means for use with display.’

The ACM Grace Murray Hopper Award was bestowed upon him in 1979. Along with Steve Jobs, he was honored with the National Medal of Technology in 1985. The University of Colorado at Boulder honored him with an honorary Doctor of Engineering degree in 1989.

He was made a Fellow of the Computer History Museum in 1997.
He was inducted into the National Inventors Hall of Fame in 2000, and in 2001, he was awarded the 7th Annual Heinz Award for Technology, the Economy, and Employment.

In 2011, he received the President of Armenia’s Global Award for Outstanding Contribution to Humanity Through Information Technology. He received the 66th Hoover Medal in 2014.

Wozniak was ranked #18 on Richtopia’s list of the 200 Most Influential Philanthropists and Social Entrepreneurs in 2017.

He is a resident of Los Gatos, California.
He is currently married to Janet Hill. From his former marriage, he has three children.
He considers himself to be an agnostic.
He was a major supporter and philanthropist to the San Jose Children’s Discovery Museum. Woz Way, the street in front of the museum, has been named in his honor to commemorate his exceptional contribution.

Steve Wozniak has a net worth of $10 million dollars.

After leaving from Apple, this co-founder of Apple Computer Inc received a bachelor’s degree in computer science and electrical engineering in 1986.