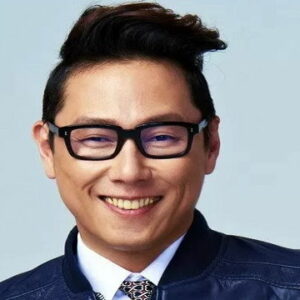 South Korean musician, composer, actor, and TV personality Yoon Jong-shin. Additionally, he is the creator, chairman, and CEO of “Mystic Entertainment,” a record label and talent agency in South Korea. Yoon, a graduate of Korean Language and Literature, ventured into music and made his debut in 1990 as a guest vocalist. He released his debut album, “Like the First Time We Met,” the following year, and it helped him get some respect as a solo performer. He released numerous other albums during the coming years, including “The Natural,” “Behind the Smile,” and “His Walk of Life 2010 Yoon Jong-shin.” His own record label, Mystic89, issued several of these albums. He has frequently worked with the musical group “015B” throughout his musical career. He made his film debut in 2000 with a cameo appearance in the movie “Can scarcely stop them.” He gradually broadened his acting and presenting endeavors by appearing in a number of TV programs and hosting a number of television variety shows. One of the most noteworthy is the South Korean chat program “Radio Star,” which is broadcast on MBC and is hosted by him since 2007.

Yoon Jong-shin was born in Seoul, South Korea, on October 15, 1969. He completed his high school education at Daewon Foreign Language High School. His studies in Korean language and literature continued after that, and he eventually graduated in 1993 from Yonsei University.

He was introduced to the music club “Sochangsa,” and his involvement with the group aided in the development of his love of music. In 1990, he made his musical debut when he joined the production collective known as “015B (ko)”. He contributed his voice as a guest performer for the song “In an Empty Street.”

On May 12, 1991, he released his debut studio album, “Like the first time we met,” on the Hyundai Sound label. He became known as a solo singer as a result of the album’s success. Yoon continued to actively engage with “015B” while creating other studio albums that displayed his personal flair.

His first three studio albums were co-written with other composers and consisted primarily of ballads. Beginning with his fourth album, he began writing ballad songs in his own distinctive manner that neither fit the bland nor the generic categories.

Yoon has released further studio albums, such as “Sorrow,” which was published on November 15, 1992, and “The Natural,” which was released on August 12, 1993.
Under the name “Daeyoung AV,” numerous other albums were released.

In Korea, he is also a talented and well-known songwriter. Yoon has contributed by creating songs for other singers in addition to penning his own songs. Songs like “On the Street” by Sung Si-Kyung and “You Mean Everything to Me” by Lena Park are examples of this.

He began acting after becoming well-known in the music industry and kept up his musical endeavors. His big-screen debut occurred in 2000 with a cameo appearance in the movie “Can scarcely stop them.” Then, from December 18, 2000, until February 22, 2002, he appeared in the South Korean television series “The Unstoppables” that was shown on SBS.

Together with Lee Hak-hee, he established the South Korean record label and talent agency “Mystic Entertainment” (Mystic89) in 2001. He currently serves as the company’s chairman and CEO.

Under Yoon’s direction, “Mystic89” has developed over time into a qualified and structured record label. The record label is a major player on a variety of platforms, including dramas, movies, and television shows in addition to the music industry.

The romantic comedy “The Beast and the Beauty,” which was released on October 27, 2005, featured him next in the role of a plastic surgeon.

He played the part of Mr. Yoon in the romantic comedy-melodrama time-travel movie “Project Makeover.” He was one of the three MCs for the show “Radio Star” that year. Currently, the program serves as the primary feature of the South Korean discussion shows “Golden Fishery.”

The first episode of “Radio Star,” starring Yoon, Shin Jung-hwan, and Kim Gura, aired on May 30, 2007. Yoon joined the show’s regular roster in 2009, and he currently co-hosts it with Kim Gook-jin and Kim Guru.

Additionally, from March 2, 2009, to September 4, 2009, he continued to appear in the South Korean comedy television program “Hilarious Housewives,” which aired on MBC.
At this time, he was also a judge on the South Korean talent show series “Superstar K.”

He has been wed to former South Korean professional tennis player Jeon Mira since 2006. Three children were born into the family.

In a guest appearance on the SBS-aired South Korean chat show “Healing Camp, Aren’t You Happy” on February 13, 2012, Yoon disclosed that he has Crohn’s disease, an inflammatory bowel disorder (IBD).

Yoon is one of the wealthiest and most well-known singers. According to our research, Yoon Jong-shin is worth $5 million according to sources including Wikipedia, Forbes, and Business Insider.